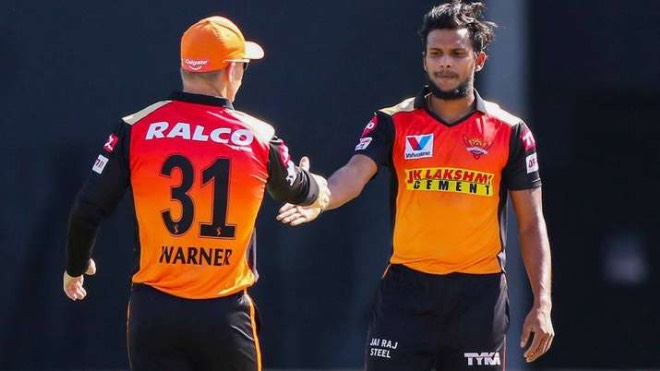 SunRisers Hyderabad fast bowler T Natarajan has tested positive for Covid-19 in a scheduled RT-PCR test ahead of the SRH vs DC IPL 2021 match, Indian Premier League said in a statement on Wednesday.

Left-arm pacer T Natarajan, who is coming back from knee surgery is asymptomatic and has been isolated along with six close contacts. Six close contacts were identified by the medical team including Vijay Shankar, Vijay Kumar (Team Manager), Shyam Sundar J (Physiotherapist), Anjana Vannan (Doctor), Tushar Khedkar (Logistics Manager) and Periyasamy Ganesan (Net Bowler) have been placed in isolation.

Despite T Natarajan testing positive for Covid-19, the match between Sunriers Hyderabad and Delhi Capitals will go ahead as plan on September 22 at Dubai International Stadium, Dubai. The decision to continue with the match comes after all the other players testing positive in the fresh round of the test.

“The rest of the contingent including the close contacts underwent RT-PCR tests at5 AMM local time this morning and the test reports are negative. As a result, tonight’s game between Sunrisers Hyderabad and Delhi Capitals will go ahead at the Dubai International Stadium, Dubai,” IPL said in a statement.

According to ESPNcricinfo, “Most of the Sunrisers members, including Vijay Shankar and Periyaswamy, had travelled to the UAE from Mumbai on September 1. Natarajan had travelled separately, in a commercial flight from Bengaluru on September 9, and linked up with the squad subsequently. All participants in the IPL had to quarantine for six days upon arriving in the UAE, and undergo testing every two days in the first week, and every fifth day from the second week.”

The development comes as a shocker after strict measures were taken by the organizers to prevent any COVID-19 cases. The cricketers were in a bio-bubble, while the hosts decided to allow some crowds.

Earlier in May, the Board of Control for Cricket in India (BCCI) had suspended IPL 2021 due to a spike in the number of coronavirus cases inside IPL’s bio-bubble. After a lot of discussions, the board decided to shift the remaining matches to UAE due to the rise in the number of Covid-19 cases in India.