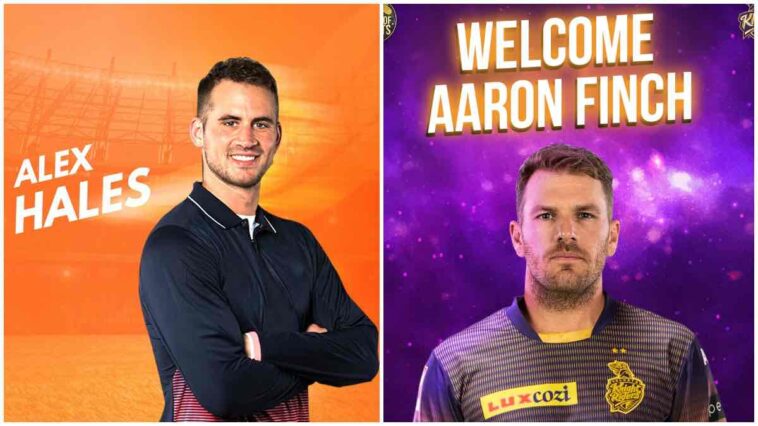 Kolkata Knight Riders (KKR) have signed Aaron Finch as a replacement for England batter Alex Hales for the upcoming season of the Indian Premier League (IPL 2022). Hales has cited bubble fatigue as his reason for withdrawal from the tournament.

Alex Hales has opted out of the season due to ‘bubble fatigue and his mental well-being’. Hales sent out a lengthy note on his social media handles to explain his decision.

“I am sad to announce that I have made the extremely difficult decision to withdraw from the forthcoming IPL. Having spent the last four months away from home in restrictive bio bubble’s and having tested positive for COVID myself in Australia, I don’t feel as though I can commit myself to another extended period within a secure environment,” said Hales in a statement on Twitter.

“It wouldn’t be fair on the team or myself if I wasn’t able to perform to the level expected of me as a result of ongoing bubble fatigue. I am truly gutted to have to turn down one of the best opportunities of my career due to the toll that the last two years of bubble life has taken on my mental well-being. I’ll now take some time to rest and recharge ahead of the summer. I want to thank KKR for believing in we during the auction and for their ongoing support in recent weeks. I wish Baz, Shreyas and the team the best of luck for the tournament and hope to see the Knight Riders fans at some point in the future,” he stated further.

Alex Hales was roped in by KKR during the IPL 2022 Mega Auction for his base price of Rs 1.5 crore, which would have been his second stint in the tournament, having played for SunRisers Hyderabad (SRH) in 2018. Meanwhile, Finch has been signed in for the same fee as his replacement, just for this season.

Following the same, KKR CEO and Managing Director Venky Mysore said, “We respect Alex Hales’ decision of choosing family and mental well-being over his participation in the upcoming season of the IPL. Bubble-life isn’t easy, and many players worldwide have shared their views on this topic. We will miss having him in the Galaxy of Knights this season, but we wish him all the best.”

“We are delighted to welcome Aaron Finch, the T20 World Cup-winning captain, to the Knight Riders family. He is excited about joining the rest of the KKR squad in Mumbai, and we look forward to benefiting from his vast experience,” Mysore added.

Two-time IPL champions, KKR will kickstart the IPL 2022 proceedings on March 26 when they take on Chennai Super Kings at the Wankhede Stadium, Mumbai.