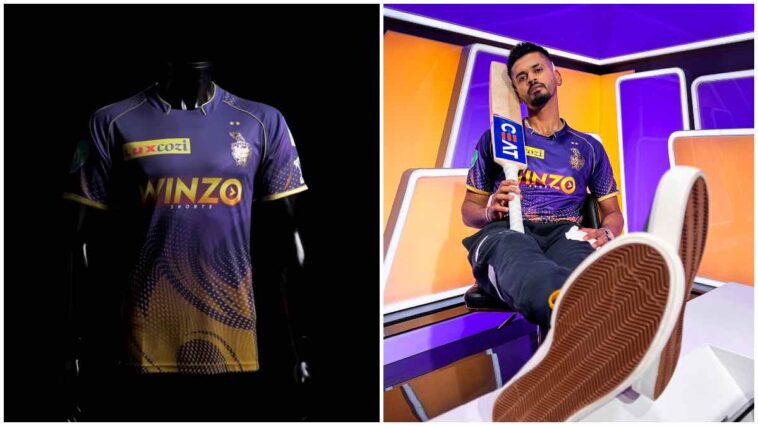 IPL 2022: Kolkata Knight Riders unveil their jersey ahead of the season

Knight Riders have stuck with their traditional colours of purple and gold, but, the new jersey boasts a lot more gold palette in their kit. The bottom portion of the jersey has an inspiring design that bodes well as a whole. The whole kit also displays the name of WinZO, the newly signed principal sponsor. WinZo is the fourth principal sponsor of the KKR since the inception of the tournament.

Newly appointed captain, Shreyas Iyer launched the jersey and was the first person to don the jersey. Along with Shreyas Iyer, KKR’s Managing Director Venky Mysore was also present at the launch.

“These are threads born with passion. The same passion that drives those who wear it. The flames burn deep within us stoking the fire to win. To conquer new challenges as we capture hearts, this is the uniform of the knights, the trailblazers, the stargazers, the game-changers – now, it’s time to shine,” Iyer said in the official unveiling video.

“The embers within shine the light on the path that’s right, that is followed by every knight on their road to greatness. This is the armor with which you shine, as you go for glory. KKR hai taiyaar,” he added.

“The best thing about captaining KKR is the rich history of winning IPL on two occasions and reaching the finals on many other occasions. If you see the players who have played for KKR before, they have a rich history and I am someone who will be fitting in their boots. So, you know it’s gonna be a really exciting journey for me starting from right now I would say,” Iyer said.

“Cannot ask for more than that. What we know of Shreyas Iyer is that he is going to lead by example with his effort and everything else will follow. It is a game, whatever happens will happen. But when that intent is there, when that effort is there, that is what you can ask for,” said Mysore in the video released by KKR on Twitter.