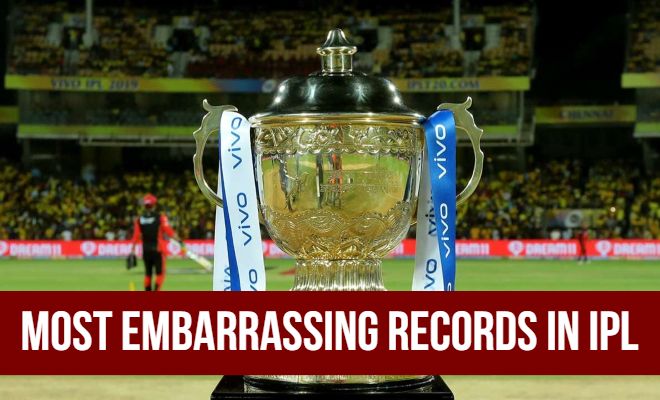 Indian Premier League (IPL) is mostly about scoring big, fours and sixes and breaking records. Some records are players are proud of but some are embarrassing. So let’s look at the 5 most embarrassing records in IPL by players.

1. Most Runs Conceded by a Bowler in an Inning

Basil Thampi has conceded most runs in four overs against Royal Challengers Bangalore (RCB) in IPL 2018. He was playing for SunRisers Hyderabad (SRH) when he conceded the most runs in an inning at M. Chinnaswamy Stadium, Bengaluru.

2. Most Expensive Over in IPL

Prasanth Parameswaran gave the most expensive over of IPL history, 37 runs in an over, Chris Gayle was at the batting end. Gayle hit him 3 fours and 4 sixes, including one no-ball. Prasanth Parameswaran was playing for Kochi Tuskers Kerala against Royal Challengers Bangalore in IPL 2011.

3. Most Ducks in IPL

Harbhajan Singh holds the records of most ducks in IPL, 13 duck out in 12 years of IPL in which he played 160 IPL matches.

4. Most Consecutive Duck in IPL

5. Worst Economy Rate in an IPL Inning (minimum 1 over)

Australian Opening Batsmen Aaron Finch holds the record of worst economy rate, playing for Pune Warriors he conceded 29 runs of the only over he bowled in that inning against Royal Challengers Bangalore. He had an economy of 29 in that inning.