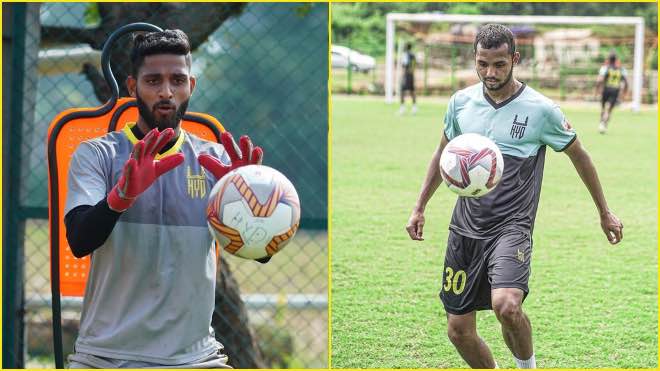 Indian Super League side Hyderabad FC have extended the contracts of two promising youngsters Anuj Kumar and Nikhil Prabhu ahead of the upcoming season (ISL 2020-21), the club announced on Wednesday. The highly-rated duo have each penned extensions till the end of the 2022-23 season.

Having recently added exciting youngsters Lalawmpuia (20) and Sweden Fernandes (20) to their ranks, Hyderabad FC have further cemented their belief in youth with the extension of Nikhil (19) and Anuj (22) who also join a host of U-23 players at the club.

Anuj, an athletic shot-stopper, was part of Hyderabad FC squad in the ISL last season. The youngster spent the latter part of 2019-20 on loan with Indian Arrows and has penned a two-year extension to his existing contract with the club.

“I am very excited to be a part of the project at HFC with a lot of good Indian young players at its core. I hope I can remain at the club for years to come and it is now time for me to repay the faith that the club has shown in my abilities,” added Anuj.

Meanwhile, Nikhil, a promising defender who captained Mumbai U-16s at a young age, joined the club last season. The Hyderabad-born youngster skippered the reserves in the 2nd Division League, registering a goal in five games.

“I am happy to have signed a long-term deal with Hyderabad FC. My family is from here and I feel a connection with the club and the city. I am proud to have captained the reserve side last season and am excited to represent a city with such amazing football history,” said Nikhil, after penning the new three-year deal.