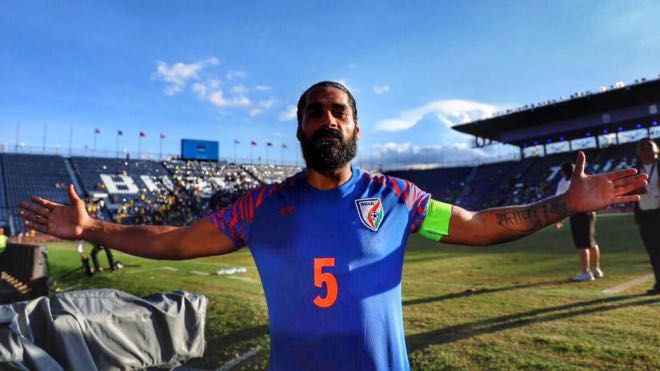 ATK Mohun Bagan FC announced the signing of India’s number one defender Sandesh Jhingan ahead of the seventh season of Indian Super League (ISL 2020-21). The India international has penned a straight 5 year deal with the Mariners without an option terminate his contract.

At least 6 Indian club and 3 foreign club were fighting for the precious signature of Sandesh Jhingan, but due to COVID-19 restrictions, all the foreign clubs pulled out of the transfer.

Thus, only the Indians clubs were in the queue. Sandesh Jhingan himself wanted to play in a foreign country, but after foreign clubs pulling out, he had no choice than a season in India.

Earlier this year, Sandesh Jhingan terminated his contract with his now-former club Kerala Blasters, after spending six years with the club. The reason that India knows is that, due to COVID-19, Kerala Blasters were struggling financially and asked most of the players to take a massive pay cut. And this is why, many of Kerala Blasters players left the team, and one among them was Jhingan.

As soon as he left Kerala, ATK Mohun Bagan jumped in for Sandesh Jhingan’s signature. And after a long wait, the Chandigarh born defender has finally chosen ATK Mohun Bagan as his next destination in his football journey.

He has reportedly also included an option in the contract which says that he will be allowed to leave the club when a foreign club approaches him to sign him.

The delighted Sandesh Jhingan told ATK Mohun Bagan, “I am delighted to have joined ATKMB. I had a detailed chat with the coach and the owners and I admire their vision and I am very happy that they felt that I could be a part of the family.”

“I have a lot of friends already there in the team and I am looking forward to join them and start working together. And also wanna say to all the loyal fans of ATKMB that together we will become not the only the greatest team in India but Asia as well. For glory Joy Mohun Bagan,” he said.

The 27-year-old defender began his professional career with Hero I-League second division side United Sikkim in 2011-12. With the inception of the Indian Super League (ISL), Jhingan was drafted into Kerala Blasters FC for the first season and was adjudged the Emerging Player of the League in the first edition of the league.

After an underwhelming 2015 campaign, Jhingan led the Kochi-based club to the ISL 2016 final, losing to the erstwhile ATK FC for the second time in three seasons. After being named the skipper for the 2017-18 campaign, he was a rock at the back for Kerala, conceding only 22 goals the whole season while losing just five matches.

The towering defender was unable to replicate similar form during the 2018-19 season. He missed the 2019-20 season due to an ACL injury, as Kerala went on to concede 32 goals and finish seventh in the league standings.