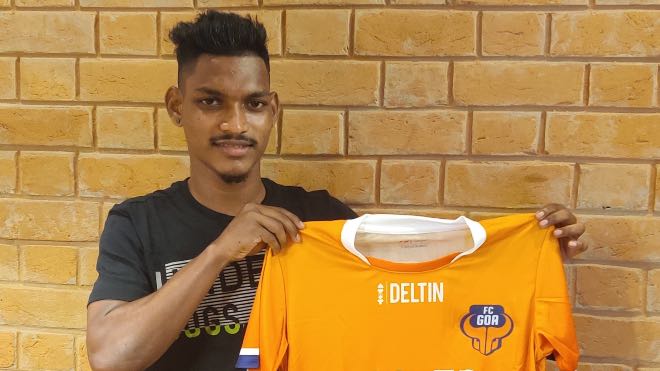 FC Goa announced the signing of the highly-rated Goan forward Devendra Murgaonkar. The 21-year-old joins the Gaurs from Salgaocar after the clubs agreed on an undisclosed transfer fee.

The 21-year-old put pen to paper on a 3-year contract with the reigning champions of the ISL League Winners Shield after earning rave reviews for his performances in the Goa Pro League over the last couple of seasons.

Speaking to fcgoa.in on his move he said, “This is something like a dream come true for me. I have been an FC Goa fan since the Club’s inception and now I get to wear the colours and get onto the field, taking on the best in India. So, you can say I am living my dream right now.”

“I feel blessed to have this opportunity and I want to take advantage of this with both hands,” he added.

FC Goa’s Director of Football, Ravi Puskur sounded equally delighted at having roped in Murgaonkar. Speaking on the same, he stated, “Devendra is a player who has consistently performed at the Goa Pro League and has racked up goals, season after season. He’s a clever player who drops to assist in the build-up and also finds himself smart pockets of space. We are confident that he will suit our style of football. We hope that his development will be accelerated by training, being surrounded by players from the first team and by gaining minutes at the ISL level.”

Having burst on the scene in the 2017/18 season, the youngster used the 2018/19 season as his unofficial coming-of-age party, scoring a league-high 20 goals in the Goa Pro League (GPL). He followed that up with 9 goals in the pandemic curtailed 2019/20 season of the GPL.

The youngster has also been part of Goa’s Santosh Trophy teams these past two seasons.

Devendra becomes the third new Goan player to join the 1st team after Leander D’Cunha was promoted from the Developmental Team and Sanson Pereira joined the Gaurs earlier as a free agent.