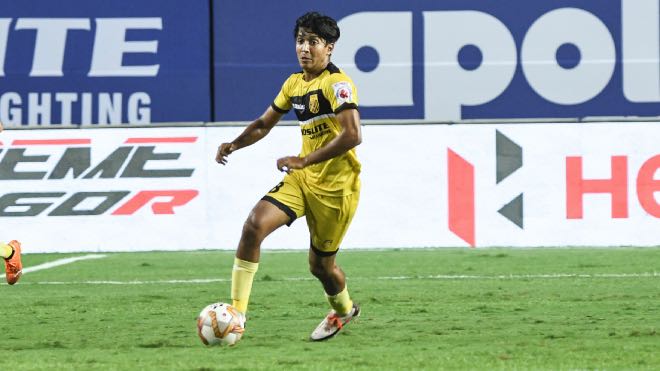 Young midfielder Hitesh Sharma has signed a two-year contract extension with Hyderabad FC after a successful campaign with the team in the seventh season of the Indian Super League (ISL 2020-21). The 23-year-old midfielder, who joined Hyderabad FC in January 2020, played a crucial role in the side’s fight for a place in the top-4 this ISL campaign.

“I am really proud and happy to have signed this contract with Hyderabad FC. I believe that we have the best players, the best management and the best coaches we can ask for at the club and I hope to continue the hard work for years to come,” said Hitesh after putting pen to paper.

Hitesh has 42 ISL appearances and a couple of appearances for the Indian National team was also named in the probable list by National Team coach Igor Stimac, for the upcoming friendlies against Oman and UAE.

“The plan is to continue the hard work and improve as a player, even in the off-season. I want to become a better player individually and I hope that we can improve as a team and take the next step in the upcoming ISL campaign,” Hitesh added.

The youngster made 15 appearances (13 starts) and grew into a regular in the first team under Head Coach Manolo Marquez this season. He played a total of 1,060 minutes in the season, which remains the busiest league campaign in his career.

Speaking about Hitesh, Hyderabad FC head coach, Manolo Marquez said, “Hitesh is a really smart player, who understands the game very well. He has a great attitude, is calm in possession and always seems to know to do the correct thing in every moment. I am sure he will grow into a better player next season as well.”