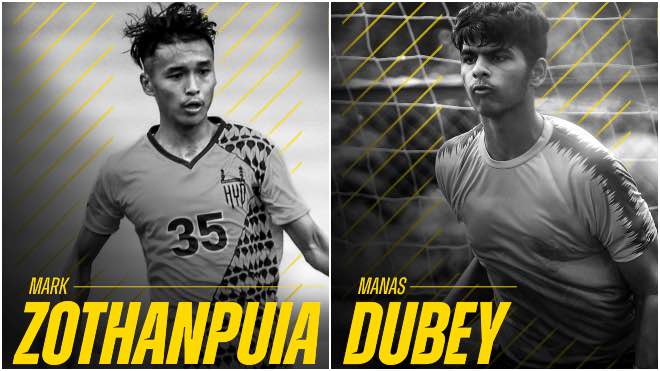 Ahead of the seventh season of Indian Super League (ISL 2020-21), Hyderabad FC added two more promising youngsters to their senior side in goalkeeper Manas Dubey and midfielder Mark Zothanpuia. The duo was a part of the reserve side last season and have each penned a long-term deal ahead of the 2020-21 Indian Super League campaign.

Manas and Mark join defenders Nikhil Prabhu, Kynsailang Khongsit, and attacker Ishan Dey who have all been promoted to the first team from the reserve side for the upcoming season, as the club aims to reward promising young talent.

Standing tall at 6’ 5”, Manas has signed an extension till the end of the 2022-23 season. The Varanasi-born shot-stopper has featured in the local leagues in Pune and Mumbai as well as the U18 Youth League.

“I am delighted to continue nurturing my abilities with Hyderabad FC. My work ethic will strive me towards being the best version of myself every day and I hope to contribute to the team in a positive way,” Manas said, after completing the formalities.

Mark Zothanpuia is a gifted footballer who played as a midfielder for the HFC reserve side last season. He made five appearances for the club in the 2nd Division League campaign and was one of the impressive performers for the side. The Serchhip-born youngster has also featured in the Mizoram Premier League for Chanmari FC.

“I am very happy to have signed a long-term contract with the club and I am fully excited for the challenge ahead. I will give my all on the pitch for this club,” said Mark, after penning an extension till the end of the 2023-24 season