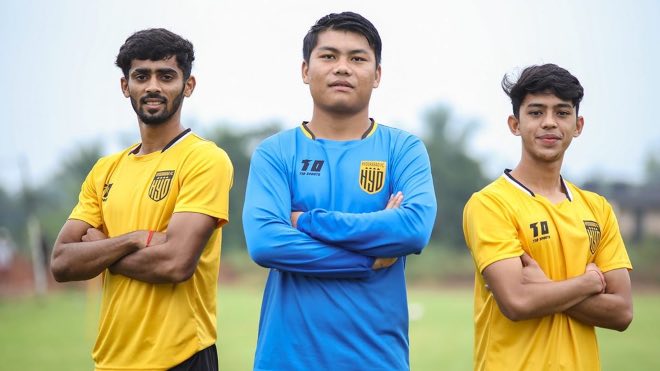 The trio have each penned a long-term deal with the Indian Super League club till the end of the 2022-23 season. The youngsters who have all played in the I-League, have also been capped by the national team at the youth level, and join a host of U22 players at Hyderabad FC.

HFC co-owner Varun Tripuraneni said, “Our philosophy at Hyderabad FC is to have a right mix of young and experienced players. We see the youngsters as a crucial part of not just our squad, but our overall project and we’re very happy to have signed Biaka, Akash and Rohit. All three of them have been training with the team in Goa and we believe they will become important players for our club in the future.”

A full-back by trait, Akash Mishra spent three years training in Germany after making it through the trials conducted by U Dream Football Academy in 2015. The 18-year-old returned to India in 2018 and soon broke into the India U18 side. He scored twice in seven games, helping the team clinch the SAFF Championships in 2019 before joining Indian Arrows.

“Among many things that excite me about Hyderabad FC is the rich football history of the city. Hyderabad has produced many star players for the country in the past and I cannot wait to be a part of the club ahead of the new Indian Super League season,” said Akash who has been training with the team in Goa.

Rohit Danu, the 18-year-old gifted attacker, started training with the AIFF Elite Academy at a tender age and was the youngest member of India’s camp for the FIFA U17 World Cup in 2017. Injuries halted his progress in the national side but Danu broke the record to stand as the youngest ever goalscorer in the I-League, with his goal for Arrows against Aizawl in January 2019, at the age of 16.

“Signing with HFC is the start of a new journey for me in my career. I am proud to have signed for the club and as a youngster, I will try my best to learn and improve myself as a player. I am glad for the chance the club has given me at such a young age,” Rohit Danu said.

A pro-active shot-stopper, Biaka Jongte, who played local football in Mizoram, first came into the limelight when he helped India U-15s to the SAFF Championship victory in 2017. He was also a part of the Indian squad that reached the quarter-finals of the AFC U16 Championship in 2018. A regular presence under the bar for India’s age-group sides, the 18-year-old also helped India win a four-nation tournament in Serbia, where he was named the ‘Best Goalkeeper’ for his efforts. He added the SAFF U19 Championship to his honours last year with the national side while impressing with Arrows in the I-League.

“I am really happy and proud to be a part of HFC. I already feel comfortable here and feel that this club is the perfect fit for me to improve as a player. I look forward to playing as much as I can and give my 100% in training,” said Biaka, after completing formalities.