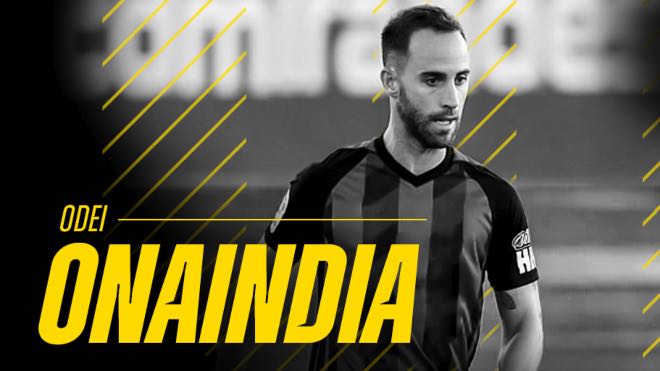 Hyderabad FC have completed their fifth new foreign signing for the season in Spanish defender Odei Onaindia, the club announced on Saturday. The 30-year-old defender joins from Spanish Segunda Division side CD Mirandes and has penned a one-year deal till the end of the 2020-21 season.

Odei joins Hyderabad after two of the best seasons in his career where he helped his side Mirandes first to promotion to Segunda Division in the 2018-19 season, and then to a strong finish in a higher division in the 2019-20 season. The biggest highlight of their season was the run to the semifinals of the Copa del Rey, the Spanish Cup competition. On their way to the last four, Mirandes overcame La Liga sides Celta Vigo, Europa League champions Sevilla, and Villarreal. Odei was also on the scoresheet against Villarreal in a dramatic 4-2 win.

“I am very happy to sign for Hyderabad and I’m looking forward to start training under Coach Manolo and competing alongside my new teammates. It is going to be an exciting season for sure. I have heard a lot of positive things about the Indian Super League from other players that I have played against. I know it is a league that is in constant growth and I cannot wait to be a part of it,” said the Lekeitio-born defender after completing formalities.

Speaking about the fans, Odei added, “I have heard a lot about our passionate supporters. While we play behind closed doors, I want to assure our supporters that they can expect a player with ambition and someone who will try to help the team as much as possible to achieve the goals. I will do my best to adapt to the team and the conditions in the ISL so that we can have a strong season.”

Hyderabad FC Head Coach Manolo Marquez believes Odei will bring in character and personality into the squad given his experience in Spain.

Manolo Marquez Said, “Odei is a tough central defender. He has played consistently in all the teams that he was a part of. A good header of the ball, very strong and fast, and very good in marking. He always gives his best and plays at a good level. In the last season, he was always present in the Mirandes line-up in their thrilling run to the Spanish Cup semifinal, so we expect him to bring in that experience.”

The Basque native began his career with home side Athletic Bilbao, and turned out for CD Basconia, CD Elgoibar and SCD Durango, before making his Segunda B debut with SD Amorebietain 2011. Odei spent the following eight seasons with Barakaldo CF, Burgos CF, Bilbao Athletic and Melilla before joining Mirandes in 2018.