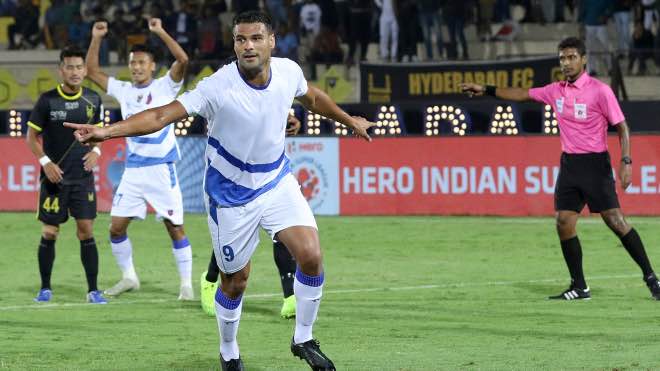 Hyderabad signed experienced Spanish striker Aridane Santana for the upcoming season of Indian Super League (ISL 202021). The 33-year-old joins after a successful season with fellow Hero ISL side Odisha FC and has penned a one-year deal till the end of the 2020-21 season.

Standing tall at over 1.9 meters, Aridane becomes the fourth foreign signing for the season and is set to play a crucial role in the squad. “Aridane will be an important player for us in the season. He is the typical striker – strong, a good header of the ball, holds up possession, someone with a good shot, and a hard worker. He has shown all these things last season at Odisha and we’ve all seen how important he was for them. The good thing is that he knows Indian football and the ISL, so settling in won’t be a hassle. His experience in Thailand will also help us, with the League set to take place in Goa, and we’re very excited to have him,” said Hyderabad FC Head Coach Manolo Marquez.

The striker was in fine form for Odisha FC during their first season in the Hero ISL, netting nine goals and bagging two assists in his 14 appearances, before an injury cut short his time in India. Having recovered, Aridane returns to India with a renewed vigour hungry for more. “I’m very happy to sign for Hyderabad FC. I have known Manolo Marquez from his previous clubs in Spain, and he is definitely one of the top coaches. I am excited to come down to India and meet up with my new teammates and get ready for the season,” said Aridane.

“My primary goal is to get to the best conditions personally for the start of the season, and then help the team with a lot of hard work on the field. It’s going to be a challenging season, and if I can help the team through goals, nothing like it,” added Aridane who has also achieved another promotion with Albacete in 2016-17.

During his most productive season (2012-13), Aridane was lethal in front of goal for Tenerife as he top-scored in the league with 27 goals to help his side to a promotion to Segunda Division.