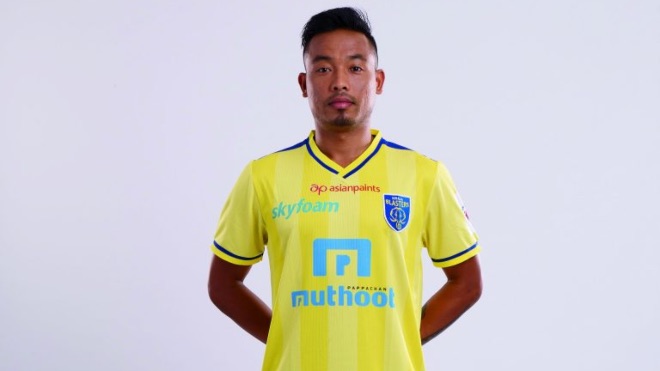 On Saturday, Kerala Blasters FC announced the contract extension with Irom Seityasen Singh for the next two seasons. The 28-year-old from Manipur started his professional career with Royal Wahingdoh in the 2nd Division of the I-League, where he stayed till 2015. During his last season with the club, he joined NorthEast United FC on loan for the second edition of the Indian Super League (ISL).

Consistent performances exhibited by him were rewarded with an Indian national team call up that year. The following years saw the Manipuri speedster on the move as he first joined Salgaocar FC in early 2017 before going back to the ISL side North East United FC. He then moved to DSK Shivajians FC on loan in 2018 before joining Delhi Dynamos FC in the ISL and back to North East United FC the following year. An injury forced the winger to miss the 2018-19 ISL season before joining Kerala Blasters last year.

“I’m really happy to extend my stay at KBFC. The club gave me an opportunity to prove myself last season. I’m confident of my abilities and am sure of contributing to the success of the team. I have always loved and admired the passion and craze the fans of Kerala Blasters have towards the club and the sport and I always feel at home while playing in front of them,” said Seityasen Singh on his contract extension with the club.

Seityasen showcased a strong performance for the club along the wide areas, as he featured in 10 ISL matches last year, picking up an assist and a goal for himself in his personal best season during the last few years. His consistency, experience, impressive speed and 1v1 skills are prime reasons for his extension with the club.

“Seityasen is one of the finest wingers in the ISL who is good with both feet and can operate out wide on the left and right side of the midfield. Last season he worked extremely hard on his fitness as he came back from a long-term injury. His display of an impressive and creative football helped the team last season. I’m glad he is staying with us, I wish him all the very best for the upcoming season. He is definitely going to make the team stronger!” said Ishfaq Ahmed, Assistant Coach, Kerala Blasters FC.