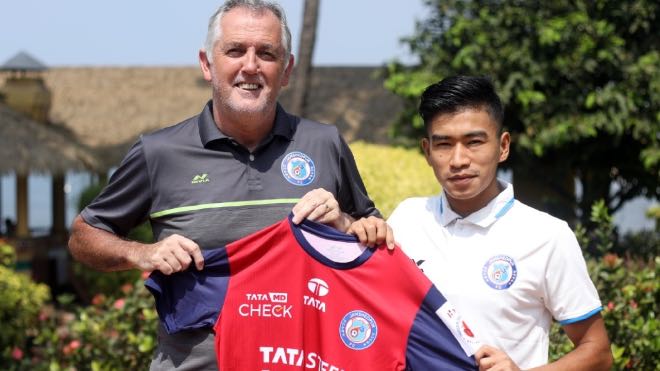 Jamshedpur FC have signed the young defender Boris Singh Thangjam in the winter transfer window of the seventh season Indian Super League (ISL 2020-21), who featured for the Indian National U17 Team that played in the FIFA U17 World Cup in 2017, has been signed by the club for two-and-a-half years until 2023.

Jamshedpur FC Head Coach, Owen Coyle was delighted to bring Boris on board. He said, “Boris is a fantastic signing for our club. He is young, with a potential to improve further. He has the ability and desire to do well and comes with a lot of ambition as he wants to show everyone how good a player he can be for Jamshedpur. He brings with him some real pace, something which we are continuing to add to our squad. There was plenty of interest from other clubs, so we are delighted he wanted to come to join us at Jamshedpur FC.”

On signing, Boris said, “I am delighted to have joined Jamshedpur. The club is in the mix to qualify for the playoffs this season and I want to help them push for the same and make history. I come with the aim of achieving some much-deserved glory for the fans in Jamshedpur and hope to put my best foot forward to achieve our goals and improve myself as a player too.”

Boris also exclaimed his excitement at the chance of playing under the tutelage of Owen Coyle. He said, “It is an honour to work and play under the guidance of a top-notch coach like Owen Coyle and I am glad to have his faith in me.”

Boris has joined the Jamshedpur FC bio-bubble and will be wearing jersey no. 2 this season (ISL 2020-21).

Boris started his professional club career with Indian Arrows after his participation in the FIFA U17 World Cup. He made his debut against Chennai City FC, also scoring in that game. In 2018, Boris joined ATK and then ATK Mohun Bagan where he spent two and a half seasons, one of them on loan to Indian Arrows, before joining Jamshedpur.