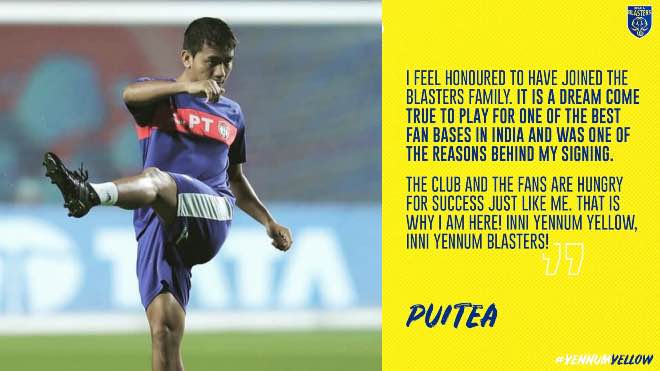 Kerala Blasters FC announced the signing of Mizoram born Lalthathanga Khawlhring from opponents North East United FC for the upcoming season of the Indian Super League (ISL 2020-21). The 22-year-old Puitea, as he is popularly known, operates in the centre midfield and can be switched out along the wings as well.

The youngster started his footballing journey with Bethlehem Vengthlang, a club that participates in the Mizoram Premier League. During 2015-16, he moved to the west, signing for DSK Shivajians, initially for their youth team before being promoted to their senior squad in the same year. It only took him four appearances that season before he was signed by North East United FC and sent on loan to Aizawl FC for the 2017-18 I-League season.

His experience during the I-League matches helped the young midfielder immensely as he adapted well to the ISL as a breakthrough talent and made 29 appearances for North East United FC over the last two seasons. His versatility was on show as he played various positions across the midfield and even picked up two assists. Puitea’s adaptability and explosive pace will make him an asset to the team as he can be trusted to do the job across the midfield as needed.

“I feel honoured to have joined the Blasters family. It is a dream come true to play for one of the best fan bases in India, which was also one of the reasons behind my signing. The club and the fans are hungry for success just like me. With our teamwork, support from the people of God’s own country and with God’s grace, I believe we can bring the Hero ISL trophy to Kerala. That is why I am here! I cannot wait to join my new teammates, coaches, support staff and get the season rolling. Inni Yennum Yellow, Inni Yennum Blasters!” said Puitea who is excited and raring to go for the new season.

“Puitea is part of the breed of new generation Indian footballers who are quite comfortable with the ball at their feet. He has a great left-foot and can operate in various positions on the midfield, both centrally and out wide on the wings. Moreover, he also has a great vision and technique on the field. I believe he is an asset to the team and can go on to have a great future for himself as well, with the club,” said Ishfaq Ahmed, Assistant Coach, Kerala Blasters FC.