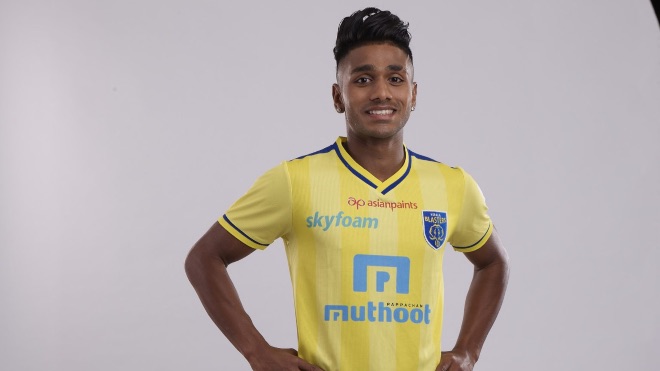 The rising star from Thrissur started off by playing for his district and represented the state U-14 team in Kolkata. His talent was recognised early as he was picked to be a part of the AIFF Elite Academy batch that was preparing for the FIFA U-17 World Cup, hosted by India. He was part of the starting line-up for all 3 matches that India played in the tournament.

The Kerala star who was making a name for himself with his burst of speed and tricks on the wings was picked by the Indian Arrows where he developed his skills for two seasons. During his time at the I-League, he scored 5 goals and set up 3 before being signed by KBFC for the 6th edition of the Indian Super League (ISL).

“Kerala Blasters is home to me and the support of the fans means everything. I was very happy with my conversation with the Sporting Director and his plans for me at the club. This is only the beginning of my career, there is definitely more room for improvement and I’m confident that Kerala Blasters is the right place for me to develop even further. Hence, I’m very happy to stay back at the club, one that truly belongs to my home-state and make the best use of this great opportunity to perform at the top and prove myself,” said Rahul, while putting pen to paper on his contract extension with the club.

The pacy winger made his debut for KBFC in the match against Mumbai City FC by coming on as a sub. He scored his first goal for the club in the match against Hyderabad FC. From his limited but eye-catching on-field performance last season, it is evident that Rahul KP is a star for the future, who can go on to achieve great things with the club. Moreover, his hard-working attitude has instantly made him a fan favourite too.

“Rahul is a fantastic young talent who can take on the opposition with his pace and power. He is also an amazing player to work with, owing to his willingness to work hard and eagerness to learn. The club is invested in developing quality young performers like Rahul and I’m positive that he will be a great player, not just for Kerala Blasters but also for the country. He has a promising future and I wish him all the very best for the season,” said Ishfaq Ahmed, Assistant Coach, Kerala Blasters FC.