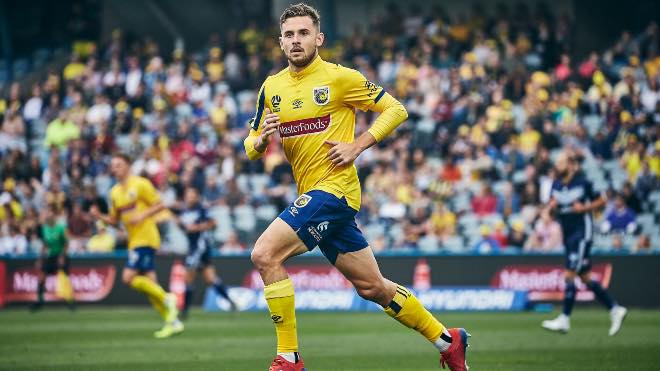 On Saturday, Kerala Blasters FC announced the signing of the 25-year old Australian forward Jordan Murray for their upcoming season of the Indian Super League (ISL 2020-21).

“I’m extremely grateful to have been given this opportunity to play for one of the biggest clubs in India. I would like to thank Coach Kibu, Karolis and the Blasters Management for their faith in me. I’m really looking forward to meeting my new teammates and I’m excited by the challenge that lies ahead,” said Aussie, Jordan Murray who will be joining the squad soon for pre-season training.

“I would also like to thank all the Blasters fans for their lovely messages of support even before my official announcement, making me feel so welcome and loved. See you all soon!” he added.

“Jordan is a very exciting player who has loads of energy. He has great attributes in the attack, does a lot of running by pressing from the front and tracking back to help the defence. I’m also very appreciative of the attitude he shows towards the game and am very excited to see him in our team,” said Karolis Skinkys, Director of Football, Kerala Blasters FC

Born in Wollongong, Australia, the young striker will be the final foreign signing for Kerala Blasters FC this season and the Asian origin player to be a part of the squad as per the new foreign player rule.

The New South Wales youngster started off with Bulli F.C as his first-team before joining Wollongong Wolves who compete in the National Premier League. The prolific finisher was initially a part of their Youth setup before being promoted to the first team. Known for his keen eye for goals and finishing abilities, Jordan joined the senior team for the 2014-15 season where he found the back of the net on 10 occasions in his 38 appearances.

The dazzling striker then moved to Sydney to join APIA Leichhardt. In his two seasons at the club, the striker was a class apart as he hit a purple patch, scoring 43 goals in his 64 appearances, winning the Golden Boot in 2018.

The consistency with which the youngster found the net earned him a move to the A-League where he was signed up by the Central Coast Mariners. After spending two years with the A-League side, Jordan Murray will be joining Kerala Blasters FC to add more firepower to the attack.