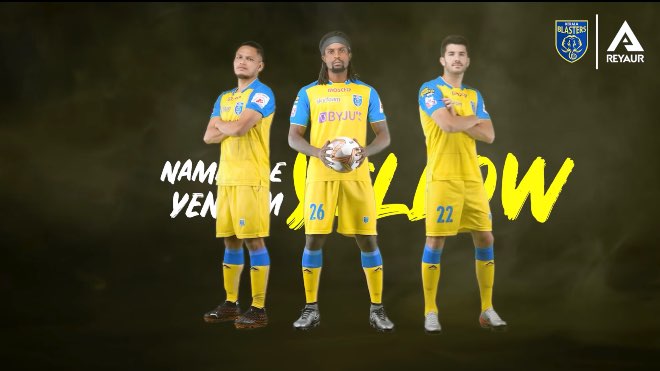 Kerala Blasters FC unveiled the Home Kit for the upcoming season of the Indian Super League (ISL 2020-21). The new jersey in the club’s customary Yellow and Blue colours pays homage to the state of Kerala.

Through the prominent Yellow hue that is core to traditional elements unique to Kerala like the Jackfruit, Banana chips, Banana fritters, Vishukani Pookal and many others that are seen in an everyday life of a Malayali, the kit celebrates the culture of the state.

The horizontal lines that run along the breadth of the jersey is representative of the classical Set Saree/Mundu kara. Overall, the home jersey symbolizes a sense of home for the squad and our supporters while donning the skin, wherever they are.

The club also launched its Away kit for the season last week. Crafted with precision, the jersey that echoes a loud blue, just like our passionate fans, features an all-over pattern that includes all elements that drive passion in our supporters: The crest, the elephant, club badge and the state of Kerala. The design was curated with a modern appeal to impart a sense of pride among the team and the fans when they wear the badge.

Last month, Kerala Blasters FC also launched the third Kit in honour of the unflinching and brave spirit of frontline workers all over the world.

“This season we have looked into what motivates us the most as a club and the reason #WhyWePlay. Our Yellow Home Kit with the gold etching is a tribute to the state of Kerala. Just like how the jersey is inspired by various elements in Yellow that are core to the state, we hope the skin unites each one of us when we don it wherever we are, transcending age, profession colouriety, culture, and geography. Yellow is our color. We are #YennumYellow,” says Nikhil Bhardwaj, Director, Kerala Blasters FC, on the launch of the fresh new kit for the season.