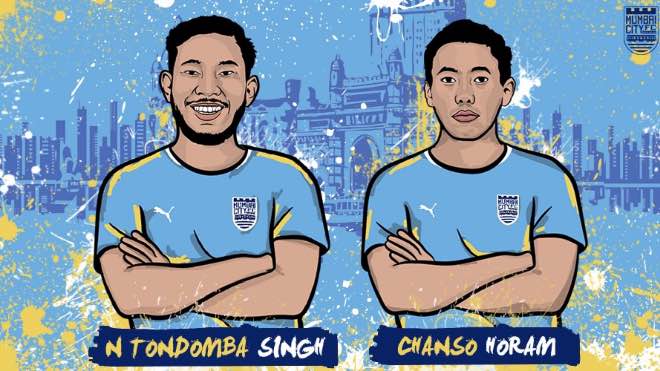 Mumbai City FC announced the signing of midfielders Chanso Horam and Naorem Tondomba Singh ahead of the seventh season of Indian Super League. Both penned down deals that will keep them at the Club until 2024.

As a part of their development, the duo will be loaned out for the 2020-21 campaign with 18-year old Chanso Horam heading to TRAU FC and Naorem Tondomba Singh heading to new I-League entrants Sudeva FC.

Both up-and-coming midfielders, Chanso last featured for NEROCA putting in impressive performances in the I-League and made 15 appearances for the Manipuri club. Tondomba, 21, joins the Islanders after having plied his trade for East Bengal in the 2019-20 campaign, making 9 appearances across all competitions.

Chanso Horam said, “I’m excited to be a part of this huge club. This, however, is just the start and I have long road ahead of me now. The club and I both agree that going out on loan at this point of time in my career will help me get more minutes and become a better player. I would like to wish my Mumbai City family a successful season ahead!”

Naorem Tondomba Singh said, “It’s a proud moment for me and my family. Mumbai City have shown a lot of faith in me, in what I can offer and I am thankful for that. They have a plan for young players like myself keeping in mind our growth and development. Going out to the I-League will help me hone my skills and I hope to return next season as a better player with more experience.”

Head coach, Sergio Lobera said, “Chanso and Tondomba are exceptional talents in midfield who have the ability to influence the game from the middle of the park. They are both still very young in their football careers, and after having had dialogues with the Club and the players, we have decided to loan them out for this season. They are aware of our expectations from them, and I am sure getting more minutes under their belt will help them have a bright future here at Mumbai City.”