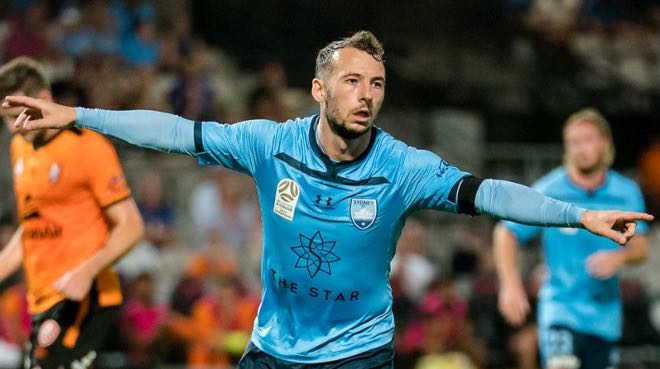 Mumbai City FC announced the signing of striker Adam le Fondre on a season-long loan from A-League side Sydney FC. The 33-year-old Englishman joins the Islanders ahead of the 2020-21 ISL season, bringing in tons of experience and quality to the Mumbai City FC attack.

Adam Le Fondre said, “This is a new adventure in my footballing journey. The ISL is one of the fastest-growing divisions in the world right now and Mumbai City has the vision and the ambition to be a leading club not only in India, but in Asia.”

“We’ve got a really strong squad, and arguably some of the top Indian talent at the club. Our coach, Sergio Lobera, has the right vision and the right plan for us. Personally, it’s a fresh challenge for me. The pressure to do well is always there and I’m ready for it. I hope I can continue scoring, helping the team and give our fans back home enough reasons to smile throughout the season,” he added.

Head coach Sergio Lobera said, “The experience, leadership and the mentality Adam brings to Mumbai City is unmatched. He is a proven goal-scorer and he has been excellent wherever he has played, be it in England or in Australia. Adam is the kind of player any coach would want on his side. We believe he can have a huge impact on our season and more importantly, can be a great mentor and a role-model to our youngsters.”

Born and raised in Stockport, Greater Manchester, Le Fondre came through the ranks at Stockport County in 2004. A loan spell at Rochdale in 2007 was made permanent where Le Fondre would go on to spend two seasons. A move to Rotherham United followed before he made the switch to Reading in 2011. Le Fondre, or Alfie as he’s fondly known, went on to become a pivotal figure in the Reading set up and was influential in their run to the Championship title and promotion to the Premier League in his debut season at the club. While they faced the drop back to the Championship the very next season, Le Fondre topped the scoring charts for Reading in each of his three seasons with the Royals.

Le Fondre was on the move again, joining Cardiff City. Several loan spells followed during his three-year stay at Cardiff, before signing permanently for Bolton Wanderers. In 14 seasons in English football, Le Fondre scored 183 goals and made 44 assists in 532 appearances. In 2018, he moved abroad for the first time to A League’s Sydney FC. Alfie enjoyed tremendous success in Australia, leading Sydney toward two Grand Final wins and one Premiers in two seasons, netting 45 goals and 4 assists in 67 appearances. With 228 goals, Adam Le Fondre sits in 6th place in the list of English goal-scorers in the 21st century.