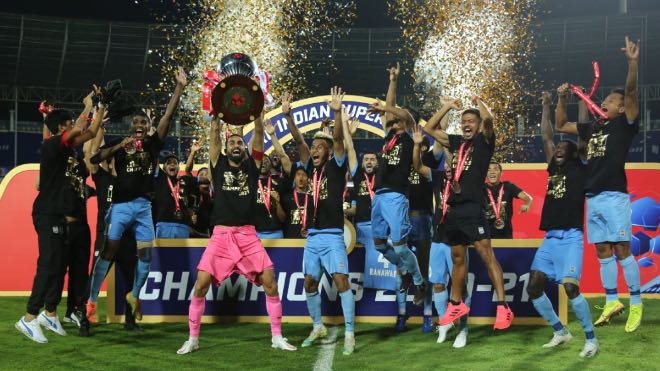 Mumbai City FC wins the maiden Indian Super League Trophy after beating ATK Mohun Bagan in a 2-1 match in the ISL 2020-21 Finals at the Fatorda Stadium in Goa on Saturday (March 13).

David Williams gave the Mariners the lead but an own goal in the first half by Tiri and a Bipin Singh winner in the final minute of regulation time meant that the Islanders won ISL 2020-21.

In the 18th minute, after Roy Krishna dispossessed Ahmed Jahouh near his own box by getting a touch on the ball to guide it to Williams, the Australian forward made no mistake and finished with aplomb from inside the box to give ATK Mohun Bagan the lead.

In the 29th minute, Mumbai City FC got their equaliser after Tiri headed the ball into his own net from the edge of his box as the Spaniard looked to cut out a long ball forward by Jahouh.

The closing stages didn’t see either team create many chances but a lapse at the back in the final minute of injury time gave Mumbai City FC the win. ATK Mohun Bagan’s goalkeeper Arindam came out of his box to deal with a long ball but failed to do so, allowing substitute Bartholomew Ogbeche to win possession and carry it with him into the box before setting up Bipin for a simple finish that gave the Islanders their maiden ISL trophy.

Speaking at the post-match press conference, Mumbai City FC’s head coach Sergio Lobera was at a loss for words after lifting the one prize that had eluded him during his stay in India.

“The feeling is impossible to describe in words. There are a lot of emotions… I am very proud of my team. We are a family and finally, you can see this on the pitch. I am very happy with this season and we deserve to enjoy this moment,” he said.

When asked to assess his match-winner Bipin Singh’s season, Lobera said, “The level of the Indian players is the key to winning trophies. Because you are playing with six players in the first XI. Bipin had an amazing season, when the team is working well only then the individuals can shine. It is not only about one, two or three players. I think there are a lot of players who have put in a lot of effort throughout the season… I am very happy because everyone deserves this.”