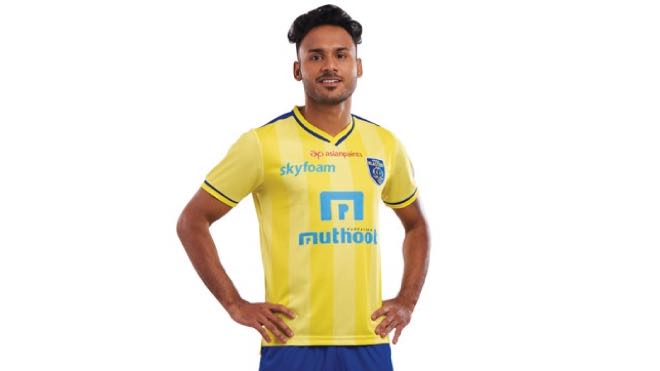 Kerala Blasters FC announced that the 23-year old, Prasanth Karuthadathkuni has signed a two-year extension. The winger hailing from Kozhikode, Kerala is a part of the squad playing in the seventh season of the Indian Super League (ISL 2020-21).

“I feel truly blessed and grateful for this opportunity to continue at my home club for the next 2 years. I’ve faced a lot of challenges but I’m ready to give it my best during the next couple of years and play in front of the fans soon,” said Prasanth after signing his contract.

Prasanth has been featured in a new wing-back role this season, he has started 2 games so far with appearances from the bench in the others. The pacey winger has always looked ready to give his all for the team when called upon and will be pushing to cement his place in the starting XI in the coming years.

“Prasanth has been working really hard in training, has always given his best for the team when needed and I feel he deserves this new contract. He has been with the club for the last few years and knows what it means to play for a big club like Kerala Blasters. Looking forward to see him grow at the club,” said Karolis Skinkys, Sporting Director, Kerala Blasters FC.

Prasanth, who was originally an athletics runner, started playing football in 2008 and represented the Kerala U-14 team before being chosen by the AIFF Regional Academy. KBFC signed the right-footed midfielder in 2016 before loaning him to Chennai City FC to gain first-team experience. Last season, he caught the eye with some spirited performances along the wing in 12 matches for KBFC and managed an assist in a crucial game against FC Goa.