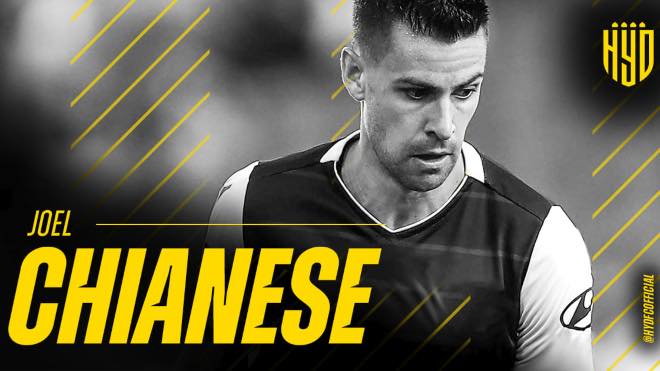 Hyderabad FC announced the signing of the Australian attacker Joel Chianese ahead of the upcoming season of the Indian Super League (ISL 2020). The 30-year-old forward signed a one-year contract with the Hyderabad-based side on Thursday.

Joel Chianese is the first Australian to sign for Hyderabad FC. Chianese signs from A-League side Perth Glory after helping them to the semifinals in the recently concluded play-offs of the 2019-20 season.

At the signing, Chianese said, “I’m super excited to join Hyderabad FC. I’m most looking forward to meeting my teammates and working together with everyone at the club. All the messages I have received have been so positive, and so I feel welcome already.”

“Hopefully my previous experience of playing in Asia can help me embrace the culture on and off the field, which helps ensure that I enjoy my football and help the team create success. The current world situation means we may not have fans at the games, but we need to work hard as a group to give the fans watching from home something to be excited about,” he added.

Hyderabad FC co-owner Varun Tripuraneni said, “Joel Chianese is an exciting player and we have followed him for quite some time now. He has been one of the consistent performers in the A-League, and we’re sure that his experience of playing in Asia will be a value add. He is someone who can slot in easily in multiple positions in attack, so that gives the team quite a few options upfront.”

During a one-year stay in Malaysia, Chianese would turn out for Sabah FA (2015) and Negeri Sembilan FA (2016) netting a staggering 17 goals in 29 league appearances in the Super League. He returned to Australia in late 2016 to join Perth and became a crucial part of the side over the next four seasons, guiding them to the top of the league in 2018-19 as his side finished runners-up in the play-offs.

Apart from scoring 25 goals in his seven seasons in the A-League, he has also experienced the AFC Champions League with Sydney FC and Perth Glory.