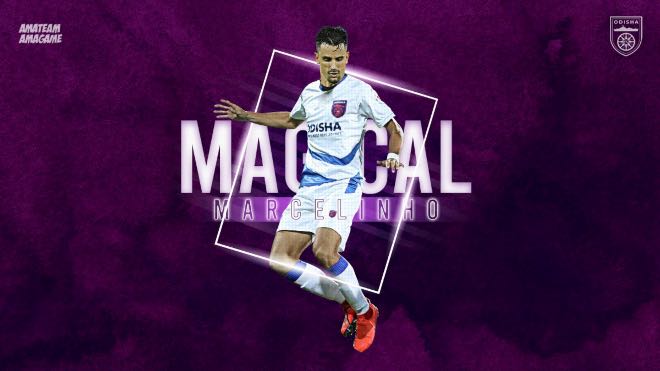 Odisha FC roped in Brazilian footballer Marcelo Leite Pereira a.k.a Marcelinho ahead of the seventh edition of the Hero Indian Super League (ISL 2020). The 33-year-old forward signed a one-year contract with the Bhubaneswar-based side on Wednesday.

He was the Golden Boot winner in the 2016 season with Delhi Dynamos by scoring 10 goals in 15 appearances and also guided the team into the playoffs. Marcelinho then played for FC Pune City and/or Hyderabad FC for three consecutive seasons and has is the all-time 3rd highest goal-scorer in the Indian Super League with a cumulative figure of 31 goals and 18 assists in 63 ISL matches so far.

After the signing, OFC President Mr Rohan Sharma said, “Life can be strange and beautiful. After a long time, It’s great to have Marcelinho back with me. Last time we were together, he set the league ablaze with his skills and goals. Now he has become the third-highest goalscorer in the ISL and I am sure he will bang some more in this season. He still has a lot to offer with his vision and scoring, and we both want to bring the trophy to Odisha this season.”

Welcoming Marcelinho to the Club, Head Coach Mr Stuart Baxter stated, “With good experience of Indian football and a record that is admired by many, Marcelinho represents a good signing on all fronts.”

A delighted Marcelinho said, “I am very motivated for the challenge. I really want to do well with my new team, new coach and the wonderful fans of Odisha FC. I hope that we have an amazing season ahead and I can’t wait for this.”