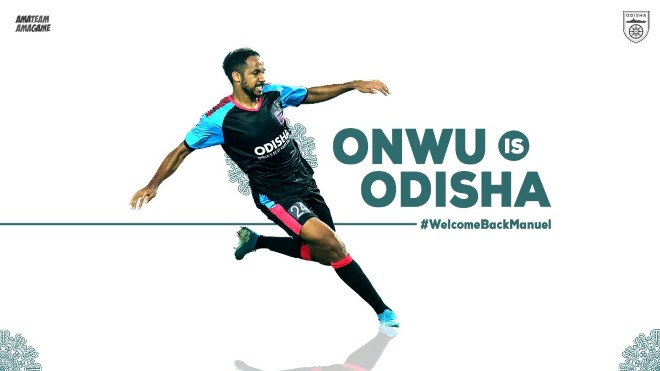 Odisha FC announced the signing of Spanish footballer Manuel Onwu ahead of the seventh edition of Hero Indian Super League (ISL 2020). The centre-forward has inked a one-year deal with the Bhubaneswar-based club on Thursday.

In this season Odisha FC have signed Jacob Tratt, Marcelinho and Diego Maurício.

Welcoming back Onwu at OFC, Club President Rohan Sharma expressed, “After Onwu devastated opponents when he came to Odisha, it was a no brainer to bring him back for another year. He showed he has elite goal-scoring capabilities and was an excellent person that gelled with our locker room. I look forward to the combo of Diego, Marcelinho, and Onwu scoring a lot of goals this season.”

Head Coach Stuart Baxter commented, “Manuel continues his relationship with Odisha and we are pleased to add his type of player to the squad. He capped off last season with a flurry of goals and we hope that he will continue his form this season as well.”

After signing for OFC, Onwu mentioned, “I am delighted to be back at Odisha FC for another season. I felt good things with the squad and the fans last year which left me with no doubt when Coach Stuart spoke to me. I had kept in touch with the Indian boys after the season was over and can’t wait to see them again. This year, we will try to take a step further and achieve the best possible standing for Odisha FC and the loyal fans.”

32-year-old Onwu, who had joined Bengaluru FC before the start of the sixth ISL season in 2019, was on fire while he represented Odisha FC on loan till the end of the tournament. He managed to score seven goals last season including a hat-trick against Kerala Blasters at the Kalinga Stadium.

Born in Tudela, Spain, Onwu had made his La Liga debut in March 2012 for CA Osasuna after playing for their B team. Before his association with Bengaluru FC, he was a part of another Spanish club UCAM Murcia CF in the 2018–19 season of Segunda Division B.

He had started playing for Club Atletico Valtierrano but made his senior debut for CD Tudelano in 2006. Apart from playing for different clubs in his home country and India, the centre-forward had also represented Georgian professional club FC Dinamo Tbilisi.