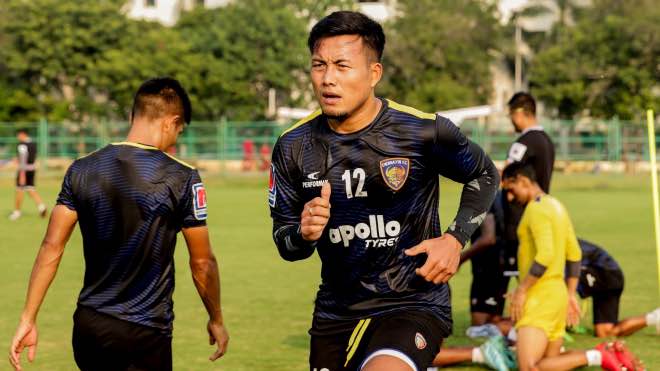 On Sunday, SC East Bengal announced the signing of the Indian international Jeje Lalpekhlua ahead of the seventh season of Indian Super League (ISL 2020-21).

Mizo born 29-year oof has played more than 50 matches for India since making his debut in 2011. Jeje has scored 94 goals in 251 matches in Indian club football.

“Every footballer in India wants to play for SC East Bengal one day. It is such a big institution. I am thrilled to join SC East Bengal in its first year of taking part in the ISL. I cannot wait to don the Red and Gold colours and give my best every time I take the field,” said Jeje Lalpekhlua on joining SC East Bengal.

Jeje Lalpekhlua started his career with Red Lizards when the club signed him at the age of 16. In the same year, he also captained the U-19 Indian team at the South Asian Games.

Jeje played for Pune in I-League 2nd Division in 2009-2010. He played nineteen games and scored five goals in his first two seasons at Pune. Jeje had also played for Indian Arrow Dempo in initials years.

The Mizo sniper has played for East Bengal’s city rivals Mohun Bagan for three seasons. He first played for them in the 2014-15 season where he scored one goal in 12 appearances. He then spent two loan spells from Chennaiyin FC at the Kolkata club in the 2016 and 2017 seasons. In the 2016 season, he scored four goals in 14 appearances and a year later, he scored five in 17 appearances.

When Jeje was a Mohun Bagan player in 2014-15 season, he spent a loan season at Chennaiyin FC, where scored four goals in 13 appearances. For Chennaiyin FC in the ISL, Jeje has made a total of 56 appearances scoring 19 goals. He has won two ISL titles with the club in six seasons. Jeje did not play the 2019-20 season due to an injury.