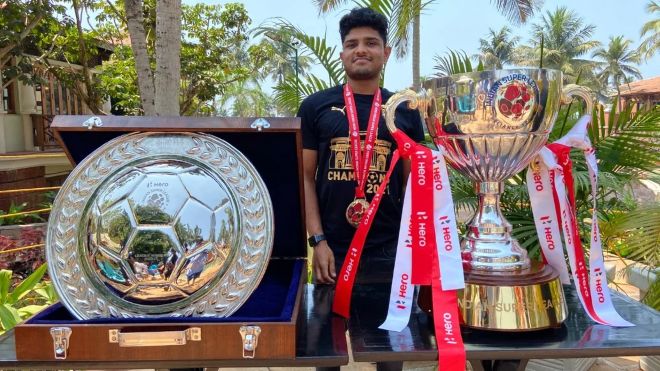 Ahead of the eighth season of the Indian Super League (ISL 2021-22), Mumbai City FC announce that Amey Ranawade has put pen to paper on a four-year contract extension with the Club, committing his future with the Islanders until May 2025.

Born and raised in Mumbai, Amey graduated from the AIFF Elite Academy and went on to represent DSK Shivajians and Mohun Bagan in the I League along with two stints at FC Goa in the ISL. After most recently turning out for Bengaluru United in the I League 2nd Division, Amey signed for his hometown club Mumbai City FC ahead of the 2020-21 campaign.

The 23-year old local boy broke into Sergio Lobera’s side and went on to make 20 appearances in a historic season for the Islanders, winning the unique ‘double’ with the Islanders bagging both, the ISL League Winners’ Shield and the ISL Trophy in the Final.

The right-sided fullback proved to be an integral part of the Islanders’ set-up under Sergio Lobera and having committed his long-term future to the club, Amey will be expected to play a key role for the reigning ISL champions in the 2021-22 season as Mumbai City FC embark on their maiden continental campaign in the 2022 AFC Champions League.

On his signing, Amey Ranawade said, “Joining Mumbai City last year was one of the best decisions I’ve taken in my career. Over the last year, this club has not only given me the confidence to show what I can do on the pitch but has been like my family and like any family, they have stood by me in good times and bad. I am extremely proud and delighted that as a Mumbaikar, I will continue to be a part of my home club and this incredible family.”

“I also want to express my gratitude to Sergio Lobera and the entire staff at Mumbai City for believing in me. I am aware that the future will bring a lot of new challenges and I am ready to repay the faith everyone has put in me and give my best for my city, my club and our fans,” he said.

Head Coach, Sergio Lobera said, “Amey possesses a great amount of quality and has the right temperament for a young professional. He is always eager to learn more every day and never backs away from a challenge. Amey is a true fighter and he has proven it time and again. We’re glad Amey has decided to commit his future to Mumbai City and that only reaffirms our faith in him and shows that he can go on and be an important part of his home city and this club for a long time to come.”