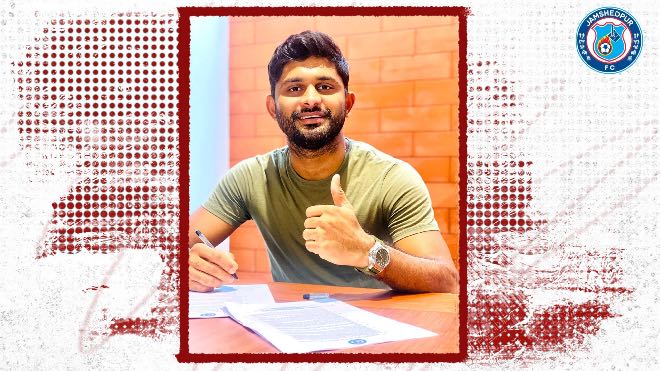 Jamshedpur FC completed the signing of Keralite defender Anas Edathodika for the upcoming season of the Indian Super League (ISL 2021-22). The 34-year-old makes his return to Jamshedpur FC where he spent a season previously in the club’s debut football season (2017-18).

Anas will don jersey number 30 in the upcoming season and will join the team for pre-season scheduled to begin in a few weeks.

Anas, who was Jamshedpur’s first Indian signing (club’s first-ever player selected in the ISL 2017-18 draft) was delighted to be back.

“It’s great to be back with Jamshedpur. I had a good experience in my previous season here where I felt the unconditional love of the fans. I look forward to the new season and want to achieve success for the fans,” Anas said.

“I wish to complete my unfulfilled dream with the club by helping us win the ISL trophy. We missed out narrowly the last time I was here and want to make amends,” he added.

Anas revealed the reason for his return as he said, “The Gaffer along with my previous experience at the club were two great factors to make a return. Owen Coyle is a great coach. We all know what he has done and achieved in the past and I firmly believe that the club is going in the right direction under hisguidance.”

Jamshedpur Head Coach Owen Coyle elaborated how Anas’ signing would benefit the team as he said, “Anas is a proven center-back with a wealth of experience playing in the top levels of Indian football for almost 15 years now. He is calm and composed under pressure and will be a valuable addition to the squad. Our objective is to continue what we achieved defensively last season. Lesser the goals conceded, the more the chances of winning and a player like Anas will give us that security.”

Anas has made close to 200 club appearances in India’s top-tier league and cup competitions as well as in AFC competitions since making his debut in 2007. The defender has played across with various top clubs like Mumbai FC, Pune FC, Delhi Dynamos, Mohun Bagan, ATK, Kerala Blasters FC and including 10 appearances for Jamshedpur.

Anas first started playing in the Indian Super League (ISL) for the Bhubaneswar-based side, Odisha FC, formerly known as Delhi Dynamos. He spent one year there and later was loaned to Mohun Bagan A.C. After his tenure with the Kalinga Warriors, he was selected by Jamshedpur FC, but only after one season, made a move to his home-town club Kerala Blasters FC, in 2018.

Anas was part of the Indian National Team at the AFC Asian Cup 2019 in UAE and played a crucial role in India’s only victory against Thailand. He has been in and out of the National Team and has featured for India 21 times since he made his senior debut in 2017.

Anas joined ATK in 2019 with a lot to prove but had to settle with only seven starts for the Kolkata-based side in a season for him to forget due to his injury woes. He struggled to find any game-time after his stint with ATK and did not play a single game in the 2020-21 campaign.