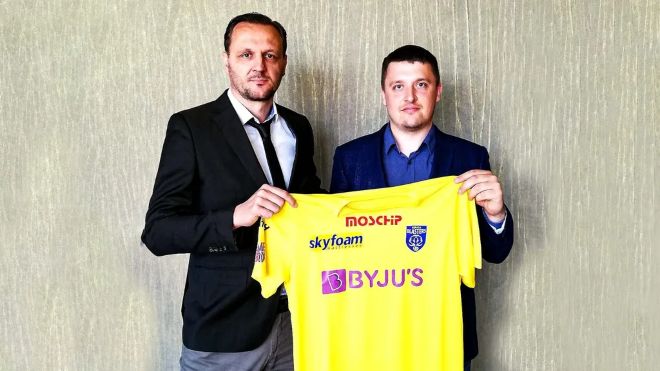 Kerala Blasters FC has announced on Thursday that Ivan Vukomanovic has been appointed as the club’s new Head Coach ahead of the eighth season of the Indian Super League (ISL 2021-22).

Kibu Vicuna parted ways with Kerala Blasters before the end of last season (ISL 2020-21) after the club failed to make the playoffs for a fourth successive campaign. Assistant coach Ishfaq Ahmed was appointed on an interim basis till a permanent replacement is announced.

Ivan comes with a broad experience of coaching in the top divisions of Belgium, Slovakia, and Cyprus. The 43-year-old Vukomanovic began his coaching career as an assistant coach at Belgian club Standard Liege in the 2013-14 season before his promotion in the subsequent term. Under him, the team secured qualification in the UEFA Europa League group stages two years consecutively. During this tenure, he was instrumental in moulding Belgian internationals like Mitchy Batshuayi and Laurent Cimon, amongst many others. He has since managed SK Slovan Bratislava in the Slovak Super Liga, with whom he won the Slovakia National Cup, and was last in charge of Apollon Limassol in the Cypriot First Division.

Prior to his coaching career, Ivan had a long and illustrious 15 years of career as a professional football player. A former defender who could also play in defensive midfield, Vukomanovic had playing stints with prominent French club FC Bordeaux as well as FC Koln in Germany, Royal Antwerp in Belgium, Dynamo Moscow in Russia and Red Star Belgrade in Serbia.

Karolis Skinkys, Sporting Director, said, “I would like to congratulate Ivan on joining Kerala Blasters FC. It was a long process to choose the right candidate for the important head coach position. I think Ivan is the right fit for this big challenge and responsibility, someone who can handle the pressure here. I see his passion for the game, deep football knowledge and clear principles about football. I like his way of thinking and I believe that Ivan will be able to implement his football ideas in Kerala Blasters FC. We are looking forward to working in the same direction to help Kerala Blasters FC grow.”

Commenting on his appointment, Ivan Vukomanovic added, “From my first contact with the club’s directors, the feeling was positive. They have a professional approach about their vision, which gave me a very good feeling. After then seeing the army of fans and support KBFC has, I didn’t hesitate a second. Immediately I knew that I wanted to become a member of the KBFC family, and I am very glad it happened. I hope we will all work together to make everyone who loves this beautiful club happy and proud. Yennum Yellow!”

Ivan’s coaching team will also include Belgian assistant coach Patrik Van Kets, who comes with 18 years of experience as a professional footballing coach. Having worked as an assistant coach at various clubs in France and Belgium, Patrick possesses a keen eye and ability to nurture and cultivate young talent.

With the Blasters having signed multiple young talents ahead of ISL 2021-22, they will be hoping to count on the experience and knowledge of Patrick to guide these youngsters. While preseason planning and preparations are already underway, the training camp is also expected to resume soon with Ivan expected to arrive in India in the coming weeks.