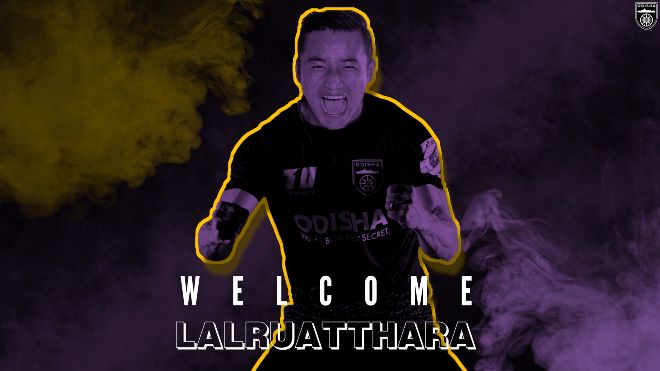 Odisha FC has completed the signing of 26-year-old Indian defender Lalruatthara ahead of the eighth season of the Indian Super League (ISL 2021-22). The Mizoram footballer, Lalruatthara represented Kerala Blasters FC until last season (ISL 2020-21), penned a two-year deal with the Bhubaneswar-based side with an option to extend for a third.

Lalruatthara started his professional career with Aizawl FC in 2015 and was a part of their I-League title-winning side. He then signed for the Kerala Blasters in 2017 and was awarded the ISL Emerging Player of the Season in his maiden appearance in the League.

A very promising defender from his teenage, Lalruatthara, has represented India at the senior and under 23 levels as well.

Speaking about the new signing, Odisha FC CEO Rohan Sharma said, “I’ve had my eyes on Lalruatthara since his breakout at Kerala Blasters. I love his defensive versatility and think he can add a lot to our defence. I know he is eager to prove he’s a national team quality defender again and he will have ample opportunities to prove it at OFC.”

“I am extremely happy that Lalruatthara has decided to join Odisha FC. He is one of the most talented defenders in India and I’m pretty sure that he will be a great addition to our side,” explained Raj Athwal, Club President, Odisha FC.

Expressing his delight, Lalruatthara stated, “I am very happy and grateful to wear the Odisha FC jersey in the upcoming season. I look forward to representing the club by giving my best. I am thrilled to play under a new system, coach, staff and am excited to learn new things to improve my game.”

“I am looking forward to playing with some familiar faces and as a team, to take Odisha FC to new heights. I thank everyone at the club for the trust and for giving me this opportunity,” he further added.