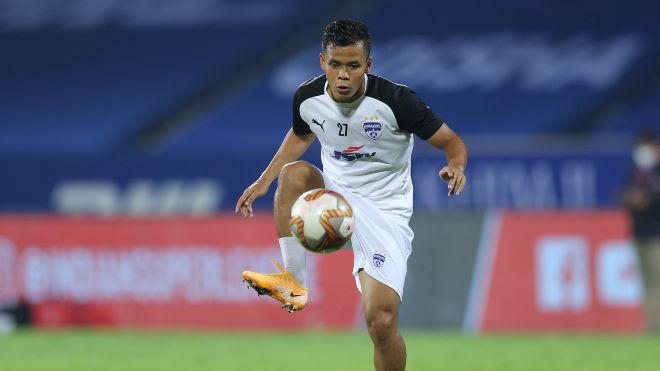 Ahead of the eighth season of the Indian Super League (ISL 2021-22), Bengaluru FC announced that midfielder Suresh Wangjam had signed a three-year extension. The new deal, which will see the 20-year-old remain at the club until the end of the 2023-24 campaign, is the Blues’ second renewal following the announcement of skipper Sunil Chhetri’s extension.

“I’m really happy to commit my future to Bengaluru FC. I came here two years ago, and I have improved tremendously as a player because of my teammates and the staff I have around me. I have so much more to learn and feel this is the best place for me to be able to do that. I also get a lot of love and appreciation from our supporters and I really want to do well for them. It was an easy decision for me to sign on,” said Wangjam.

“Suresh has grown immensely as a player and a person since we first signed him and we were always keen on keeping him at this club. He has a bright future ahead of him, and we are glad that he will spend the next stage of his development with us. Suresh is one of the few players from the U17 squad at the 2017 FIFA U17 World Cup who have become a consistent feature in the senior national team, and that reaffirms our belief in youth and the success of our player development pathway,” said club CEO Mandar Tamhane.

Manipur-born Wangjam, who joined the Blues in 2019, represented the club’s Reserve squad briefly before making his debut in the Indian Super League in the same year. The former Indian Arrows player has since then cemented his place in the Bengaluru squad, making as many as 30 appearances in the League in addition to starts in the AFC Cup.

Wangjam, who received his maiden call up to the Senior National Team in March, made his debut for the Blue Tigers against Oman later that month. Having represented the Indian U17 side at the FIFA U17 World Cup in 2017, Wangjam has been a regular feature in Igor Stimac’s 2023 AFC Asian Cup qualifying campaign, featuring in each of the three matches in Doha earlier this month.