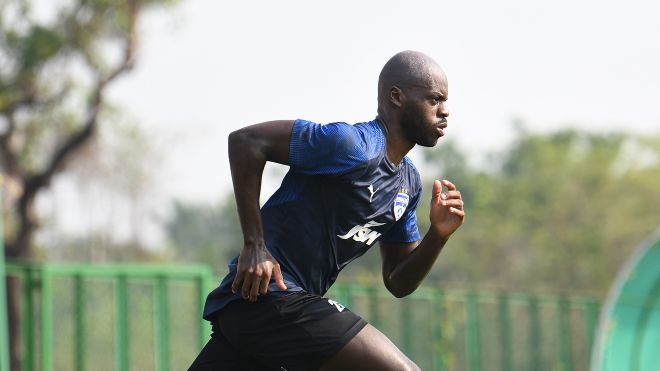 Bengaluru FC, on Saturday, announced that defender Yrondu Musavu-King had signed a two-year extension, adding to his earlier short term contract with the club ahead of the eight season of the Indian Super League (ISL 2021-22).

Gabonese centre-half Yrondu Musavu-King have joined Bengaluru FC in March this year for AFC Cup 2021 campaign but have now extended his stay at the club. The 29-year-old, who made his debut in a 5-0 win over Tribhuvan Army FC in the AFC Cup Preliminary Stage Two clash, is Blues’ Head Coach Marco Pezzaiuoli’s first foreign acquisition ahead of the new season.

The defender’s extension follows the arrival of young Indian midfielder Rohit Kumar, and Marco Pezzaiuoli said he was happy to see the club keep hold of Musavu-King, who is a product of the Caen Academy in France.

“First of all, I would like to thank the club CEO, the coach, all the staff and my teammates who welcomed me so well when I first came to India. I had good feelings about this club right from the start, and that is one of the reasons why I have decided to extend my adventure here,” said Musavu-King, following the completion of formalities on his new deal.

“This group has good quality and the coach convinced me about the project he is building at a club that has been so successful. This fresh two-year deal is a new chapter in my professional life and it is one that I will be approaching with everything I can give. My goal is to win as many games as possible. I have seen the mentality and quality this team possesses and I am confident that together we are going to achieve many beautiful things,” King added.

“I am pleased that we have managed to secure the signature of Musavu-King. He is a fantastic professional with a wealth of experience as he has shown during his stay at Bengaluru FC so far. Football aside, he is also a warm personality in the dressing room and we look forward to having him in a Bengaluru shirt for two more seasons,” said Pezzaiuoli.

Musavu-King has featured at the international level with Gabon, making his debut in a 2014 FIFA World Cup Qualifier against Congo, and has turned out clubs in Europe’s top divisions like Granada, Udinese, Lorient and Toulouse, among others. The Libreville-born centre-back said he was excited and looking forward to the new season.

The Blues are back in action next month when they take on Eagles FC in a 2021 AFC Cup Playoff clash.