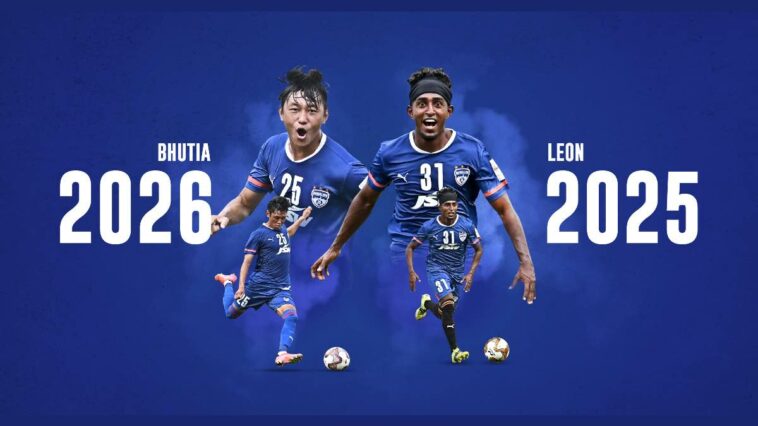 Bengaluru FC, on Tuesday, announced that young winger Leon Augustine and wing-back Namgyal Bhutia had signed extensions ahead of the ninth season of the Indian Super League (ISL 2022-23).

While Leon signs on for an additional two seasons, Bhutia’s new deal will see him play for Bengaluru till the end of the 2025-26 season.

The announcement comes as part of a series of extensions at the club, with the Blues having handed new deals to Naorem Roshan Singh, Parag Shrivas, Lara Sharma and Wungngayam Muirang in recent weeks.

“I’m really happy to sign on with Bengaluru FC because this is a club that gave me an opportunity and helped me develop as a footballer since I was 18 years old. The last season did not go according to plan for me, as I was struggling with injuries, but I am really looking forward to next season and to playing a bigger role for the team,” said Leon, following the completion of formalities on his deal.

“Being a part of the BFC family is a matter of great joy for me, and I am happy with how much I’ve improved as a player during my time here. I am really glad to have signed a new deal with the club, and look forward to contributing more to the first team in the coming seasons,” said Bhutia.

“Leon and Namgyal have been projects that we have nurtured over the last few years, and given the kind of role the younger players will have this season, tying them down to longer deals was always part of our plan. I am certain we will see them take the next step under Simon,” said club CEO Mandar Tamhane.

Leon, who was selected to join the club through trials in 2016, and was part of Bengaluru FC’s first Residential Academy squad, moved his way up the ranks and made his first-team debut in the 2018 AFC Cup. He scored his debut first-team goal in the 2019-20 Indian Super League campaign against Hyderabad and also featured for the Blues in their Durand Cup run of 2021.

Bhutia, a product of the AIFF Academy, joined Bengaluru FC in 2017 and spent his first season on loan with Indian Arrows in the I-League. On his return, the 22-year-old went on to represent the Blues in the I-League 2nd Division and was later selected as part of the club’s first team squad for the 2020 AFC Cup.

Versatile in his position, Bhutia has made seven appearances in the Indian Super League so far.