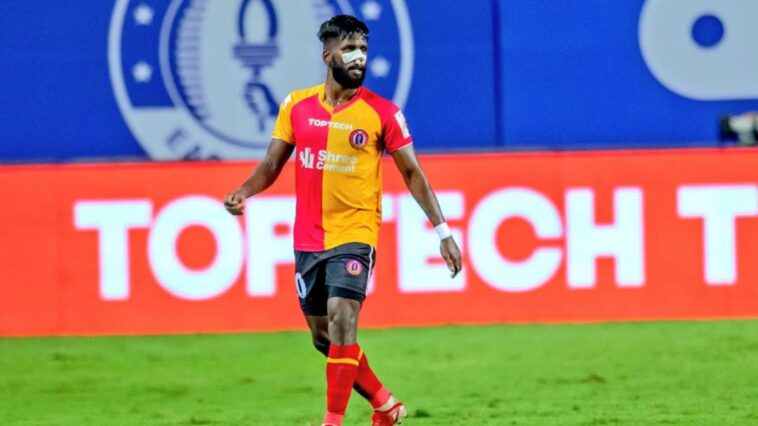 Ahead of the ninth season of the Indian Super League (ISL 2022-23), Bengaluru FC announced the signing of full-back Hira Mondal on a two-year deal that runs through until the end of the 2023-24 season.

The 25-year-old, who most recently turned out for SC East Bengal in the Indian Super League, is the Blues’ fifth signing under Simon Grayson, following the acquisitions of Prabir Das, Javi Hernandez, Faisal Ali and Amrit Gope.

“I’m really very happy to join Bengaluru FC, a team that has been among the most successful in the last decade of Indian football. The core of the Indian National team plays for BFC, and to think that I will be able to share a dressing room with them is an amazing feeling. I want to make the most of this experience and give my best both on and off the pitch,” said Mondal, following the completion of formalities on his deal.

“I’m really thankful to the management and staff for believing in my abilities. Last season was my first in the ISL, and I had never imagined that I would get an opportunity to move to a club like BFC so soon. I am also very eager to meet the West Block Blues, who are a fan club that everyone knows. I’ve heard much about them, and to play in front of them will be a great feeling,” added Mondal.

“Hira is a player who has consistently improved his game over the last few years and is someone we had set our sights on for some time now. We are very happy to have him join our squad ahead of the new season. He had a fantastic year with SC East Bengal, and we are certain that he will play a big part in the team we are building – one that’s centred around young talent,” said club CEO, Mandar Tamhane.

A full-back who loves to push forward into attacking positions, Mondal has previously turned out for Kolkata-based sides Rainbow SC, Tollygunge Agragami and Peerless, having started his youth career with Calcutta Port Trust in 2015.

Mondal, who won the GTA Governor’s Gold Cup in 2018 with the East Bengal Reserves and the I-League 2nd Division with Mohammedan SC in 2020, has also represented West Bengal in the Santosh Trophy. The Kolkata-born fullback made 16 appearances in his debut appearance in the Indian Super League last term.

Named in the I-League’s Team of the Season for 2020-21 following a string of stellar performances for Mohammedan SC, Mondal signed a one-year deal with SC East Bengal in 2021.

In the 2020-21 I-League campaign, prior to his move to SC East Bengal, Mondal made 14 appearances for Mohammedan, scoring twice and grabbing one assist as the Black Panthers finished sixth on the table.