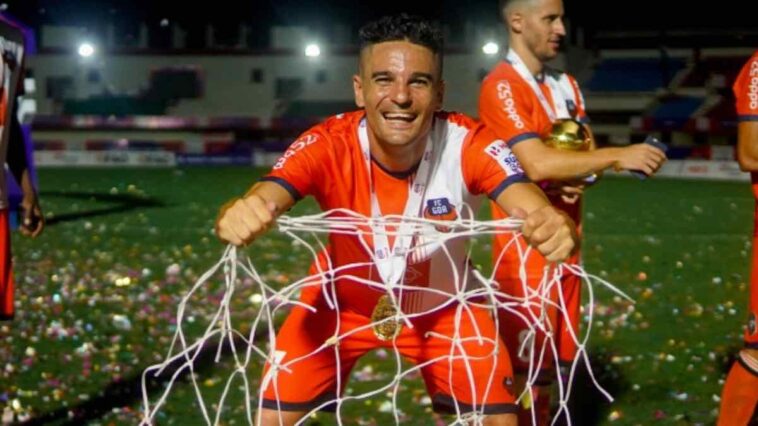 FC Goa announced the appointment of Carlos Peña as the club’s new head coach ahead of the ninth season of the Indian Super League (ISL 2022-23). The 38-year-old returns to the FC Goa two years after finishing a trophy-laden spell as a player with the Club.

“I am delighted to be back at FC Goa as the head coach. It was a very easy decision. And whilst there were offers for me to choose a bigger role in Albacete and in other clubs in Spain, the offer to take charge of FC Goa was too good to pass on,” Carlos Peña said after signing.

“Having served as an assistant coach and head coach of youth teams over the past two seasons, I believe this is the perfect opportunity for me,” he added.

“Everyone knows my love for this club and the history that we share. My only focus now is to get FC Goa back to the top. I’m here to work hard and bring more success to the club and I can’t wait to get started,” he said.

FC Goa President Akshay Tandon also sounded delighted on the appointment. He said, “We are very pleased to welcome Carlos Peña to FC Goa as our head coach. Carlos is a leader and a real student of the game. He has a wealth of knowledge and a great understanding of the club and our philosophy of football.”

“He has done an amazing job at Albacete in his first season as head coach, nurturing the youth at the club. We hope that he will continue to do so for us,” he added.

“After 2 years with us as a player, during which he became a club icon, we believe this is the perfect time for him to return and are delighted he has done so. We will do our utmost to make sure he and his whole coaching team have the support he needs to be a huge success,” he said.

A UEFA Pro License holder, the last two seasons saw Peña get into coaching following his retirement at the end of the 2019-20 season. The new FC Goa coach started off his coaching career with the youth team of Lorca before moving on to UCAM Murcia.

Peña’s credentials grew stronger with each passing day as the former FC Goa mainstay finished the 2020-21 season as the Assistant Coach of Lleida Esportiu’s senior team.

The former Barcelona man took over the reins of the Albacete Balompie youth team at the beginning of last season, plotting their campaign in the Juvenil League. Considered as one of the best youth leagues around the world, nurturing talents for all major La Liga clubs, Albacete have had a season to remember so far.

Under Peña’s guidance, the club scored more goals in the Juvenil League this season than any other season in the past 20 years. They also recorded a double over the formidable Villarreal side whilst holding Atletico Madrid to a draw, leading the club to hand 17-year-old Ruben Cantaro from the youth side a debut for the senior team.

Attacking flair has been a trait of Peña’s side so far with the team recording 7-1 and 5-1 wins over Calavera and Alzira respectively this season.

Peña came through the ranks at Barcelona, representing their C and B teams before moving to play for Albacete. After spending four years at the club, the former defender spent one season at Recreativo de Huelva before moving to Real Valladolid in 2010.

Peña spent five years at the club helping them return to La Liga during his second season at the club. He has also gone on to represent Oviedo, Getafe, and finally Lorca FC before being roped in by the Gaurs in 2018.

The Spaniard’s list of accolades includes the UEFA European U19 Championship, which he won with his native country in 2002. Apart from that, he was also a part of the side that finished runners-up at the FIFA U20 World Cup in 2003.

In his first season with FC Goa, Peña helped the Club reach the ISL Final before leading the Club to their first silverware in the 2019 Super Cup. The Spaniard helped the Gaurs script history in his last season as an FC Goa player in 2019/20 when they became the first Indian team to qualify for the group stages of the AFC Champions League.

Peña amassed 43 senior appearances for FC Goa as a player, helping the Club establish itself as a real powerhouse due to his presence at the back.