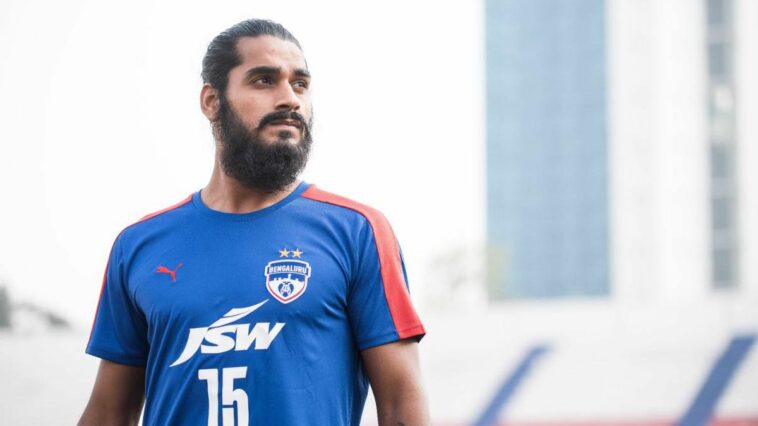 Bengaluru FC have announced the arrival of star defender Sandesh Jhingan ahead of the upcoming season of the Indian Super League (ISL 2022-23), the club revealed the signing through their social media handles on Sunday.

The 29-year-old, who most recently turned out for ATK Mohun Bagan, joined Simon Grayson’s squad for their open training session at the Bangalore Football Stadium, and is no stranger to the club, having turned out for the Blues in a loan spell during their Federation Cup winning 2016-17 season.

Jhingan represents the latest in a string of new signings by Bengaluru under Head Coach Simon Grayson, with the side having acquired the services of Javi Hernandez, Roy Krishna, Prabir Das, Hira Mondal and Aleksandar Jovanovic among others.

“There were a few factors that decided to come back to Bengaluru FC easy. I’ve spent a season here before and the amount of love and support I’ve received from the fans even after I’ve left has been very special. I’ve played at the Kanteerava more than just a few times with the national team and Bengaluru, and the atmosphere has always been electric,” said Jhingan, after completing the formalities on his deal.

Speaking on the signing, Grayson said, “We have a squad that possesses experienced leaders, and Sandesh fits right into the role. We’re glad to have him on board, and hope to use his quality and experience to help us through what we’re hoping is a successful season for this football club.”

Club Director, Parth Jindal said, “We’ve been through a very sure process of strengthening this team with the right kind of signings, and Sandesh Jhingan fits right into our plans. He’s been a Bengaluru player once before, has won a trophy with us and has the kind of mentality, leadership qualities and fight, that this team needs at the moment. “We’re also glad that we could turn his signing and unveiling into a little surprise for the fans at the club’s open training session on Sunday, and going by their reaction, we know how much this means to them.”

“We’re also glad that we could turn his signing and unveiling into a little surprise for the fans at the club’s open training session on Sunday, and going by their reaction, we know how much this means to them,” he added.

Jhingan started his football journey at the St. Stephen’s Academy before moving to I-League 2nd Division side United Sikkim in 2011. After two seasons in Sikkim, the first of which saw the side promoted to the I-League, Jhingan had a one-year spell at Mumbai FC before signing with ISL side Kerala Blasters in 2014. From the Blasters, Jhingan made three loan spells to I-League clubs; Sporting Clube de Goa (2015), DSK Shivajians (2016) and Bengaluru FC (2017).

Making his ISL debut with Kerala Blasters FC, the centre-back was adjudged as the Emerging Player of the League in the inaugural season in 2014 and since then, has been one of the most prominent Indian defenders in the league has witnessed.

In 2020, Jhingan signed a five-year deal with ATK Mohun Bagan, guiding his side to the ISL 2020-21 final. The centre-back, who was named AIFF Player of the Year for the 2020-21 campaign, is also an Arjuna Award winner.

The 29-year-old centre-back moved to Croatia ahead of the 2021-22 campaign and joined HNK Sibenik. Plagued by injuries, Jhingan failed to make an appearance for the club.

He then re-joined ATK Mohun Bagan in January, when the team was struggling with injuries and suffered a dip in form. His addition to Juan Ferrando’s squad strengthened the backline and helped the team earn a playoff spot.

Jhingan made nine appearances for the Mariners in ISL 2021-22, making 30 clearances, 25 tackles, 14 interceptions, and 13 blocks along with a passing accuracy of 86%.

Last month, Sandesh Jhingan left the club after the expiry of his contract.