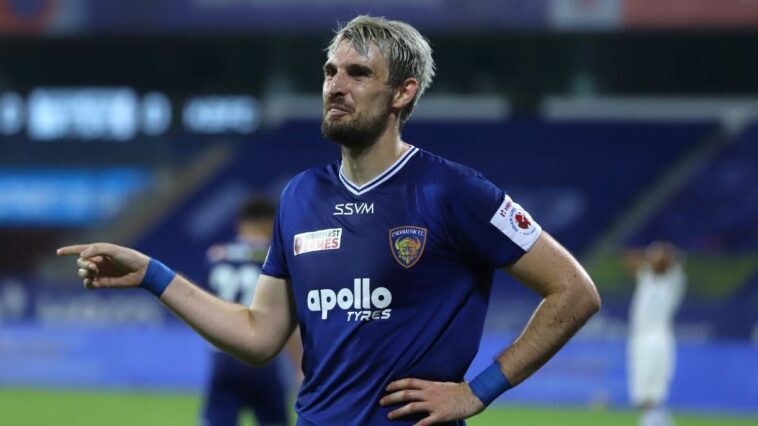 Kerala Blasters FC announced the departure of defender Enes Sipovic from their squad ahead of the new season of the Indian Super League (ISL 2022-23), the club announced through their social media handles on Friday.

“Thank you Enes Sipović for all the beautiful memories you’ve given us on and off the field over the past year. Wishing you all the best for what lies ahead. #YennumYellow #KBFC #കേരളബ്ലാസ്റ്റേഴ്സ്,” Kerala Blasters said in a Twitter post.

The 31-years-old defender penned down a farewell comment on Instagram, “Thank you @keralablasters for an opportunity to represent all Malayali and all supporters of our beautiful team. My family is grateful for everything you have done for us, Imran was born as BLASTER and his parents will have an amazing story to tell him.”

The Bosnian international began his youth career at Bosnian club Zeljeznicar in Sarajevo and after spending one year here, he joined the Romanian club, SC Otelul Galati, in the 2008-09 season. The footballer won the 2010-11 Romanian top-division championship title with SC Otelul Galati.

After six productive seasons at Otelul Galati Sipovic, he moved to various clubs and enjoyed his stint at each club which includes KVC Westerlo (Belgium), Ittihad Tanger & RS Berkane (Morocco). Before moving to ISL, the defender played for Umm Salal in Qatar.

After spending a year with Chennaiyin FC in 2020-21, the full-back joined the Kochi-based team in ISL 2021-22. Sipovic featured in 14 matches for the Tuskers, he scored one goal and made 20 interceptions during this time.