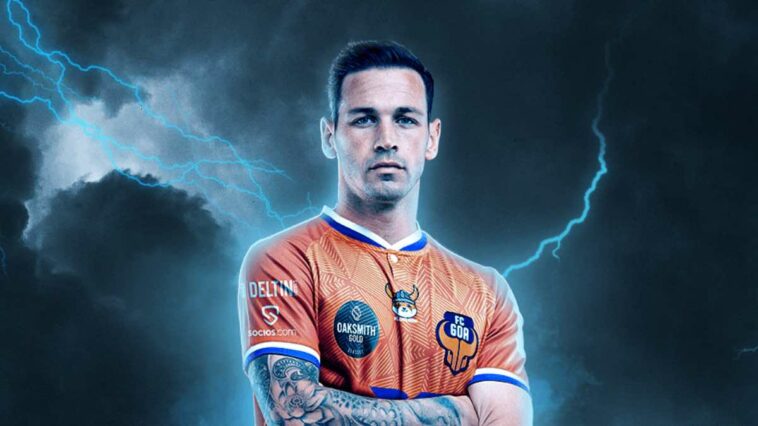 FC Goa have completed the signing of Alvaro Vazquez, the club said in a statement ahead of the ninth season of the Indian Super League (ISL 2022-23). The player has penned a two-year contract with the Gaurs, as a result of which he will wear their iconic Orange till the summer of 2024.

In his first season in the Indian Super League in 2021/22, the striker finished with 8 games and 2 assists to his name as he propelled Kerala Blasters to their first final appearance since 2016.

“I’m extremely happy to join FC Goa. The club has an ambitious project and a playing style that I love. Having spoken to the Club officials and Edu (Bedia), I was convinced that I can be the best version of myself here,” Vazquez said after signing the contract.

“For me, Goa is one of the biggest clubs in the Indian Super League. Last season might not have been the best for the Club, but I believe we will surely move back to the top this coming season. I have heard and seen the fans of Goa, who love football. I want to experience playing at Fatorda. Honestly, I can’t wait to play my first game in the club’s colours,” he said.

He stated, “We’re delighted to secure the services of Alvaro. He’s someone we’ve always kept an eye on long before his arrival into Indian football and given he’s already adapted to India, we moved quickly this summer to secure his services when the opportunity arose.”

“His quality on and off the ball is undeniable and fans of Indian football are well aware of his technical prowess. We’re confident he will slot in seamlessly into the team and with our style of football, I’m sure he’ll be a success,” he added.

Born in Barcelona, Alvaro Vazquez spent the major part of his football career in Spain. And with Vazquez now playing in a scheme that has the potential to eke out the best in him, he could be on for an even better season than last time around.

The 31-year-old took his baby steps into the sport at LaLiga club RCD Espanyol’s youth team. He then rose through the ranks and eventually earned a promotion to their first team in 2010. In the same season, he also made his debut in the Spanish top-flight, against Real Madrid and scored a goal against Barcelona to deny them a victory.

Two years later, the striker shifted base to Getafe where he remained for four seasons. During this period, Vazquez also got his first taste of Premier League action when he was loaned off to Swansea City on a short-term deal.

In 2016, the Spaniard returned to Espanyol where he remained till 2019. His other former clubs include Gimnastic de Tarragona, Real Zaragoza and Sporting de Gijon in the Segunda Division.

A former Spain junior international, Vazquez emerged top-scorer at the FIFA U20 World Cup in 2011 before becoming a part of the side that won the UEFA U21 EURO in 2013. Across his 17-year-long footballing career till date, the 31-year-old has scored 80 goals along with providing 19 assists in 344 competitive appearances for both club and country.

Some of the notable coaches that he has played under include Mauricio Pochettino, Michel Laudrup and Quique Sanchez Flores.