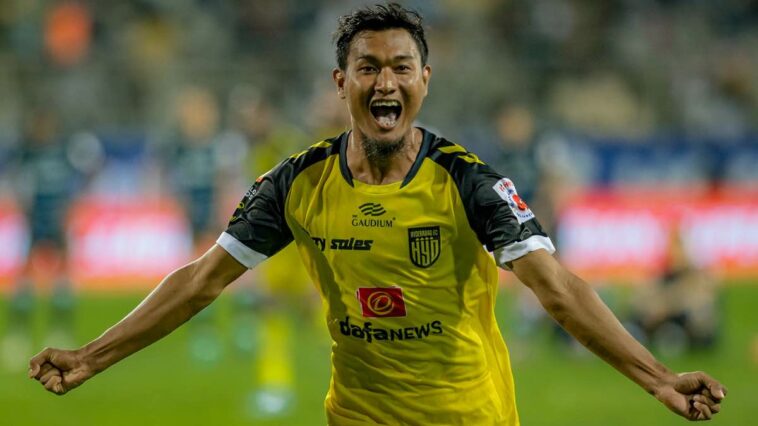 Ahead of the ninth edition of the Indian Super League (ISL 2022-23), Halicharan Narzary has signed a new contract with Hyderabad FC, the club announced on Tuesday.

He joined Hyderabad FC back in 2020 and has since been a trusted name on the team sheet for Manolo Marquez.

Narzary played every game in his first season at the club and scored important goals that almost took HFC over the line.

Last season, he picked up an injury in the first game of the season and missed a few months of action. But Manolo kept his trust in the winger as Narzary fought back from injury, and helped the team in the final games of the league stage, before scoring the all-important penalty in the ISL final that made Hyderabad the Champions of India.

Narzary is one of the most experienced wingers in the country with 84 appearances to his name in the ISL. The 28-year-old has played league games all over the country and also has 27 appearances for the National Team.

“I am super excited to extend my stay with this wonderful club,” said Narzary after penning his new deal that will keep him at the club until the end of the 2022-23 season.

“I am thrilled to be a part of this group again and I cannot wait for the new season to get started,” he added.

This trust from Manolo and the togetherness of the players made Narzary’s decision to stay easier, says the Kokrajhar-born speedster.

“Coach Manolo definitely played a big role in extending my stay at the club. I love to play under him and hope to learn under his guidance for years to come,” he said.

“Also, the squad at the club is like a family. We have been together for more than two years now and as a group, we are friendly and helpful. This gives us a special bond that I really want to be a part of,” Narzary added.

Speaking to the fans, Narzary said, “For us, it was a really tough season without the fans. But the motivation we receive from you guys makes it easier for us to work hard.”

“I really hope that this season, we can experience the cheers of the fans from the stadium. Please make sure you are there to support us till the end,” he added.