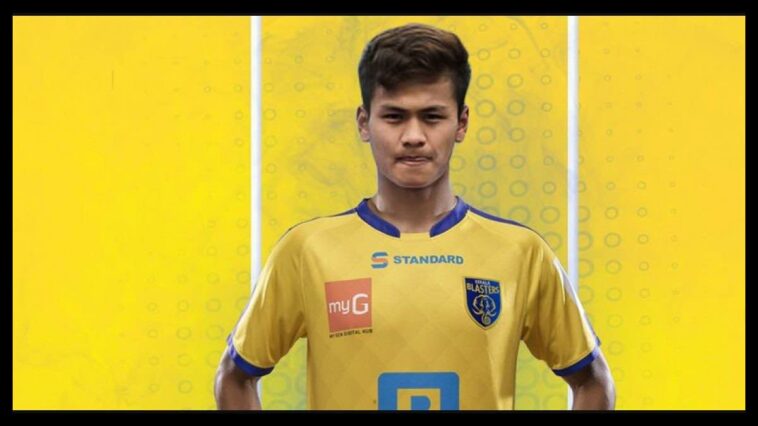 Ahead of the upcoming season of the Indian Super League (ISL 2022-23), Kerala Blasters FC announced the contract extension of young midfielder Jeakson Singh Thounaojam. The player will be with the club for the next 3 years until 2025.

Jeakson is currently with the national team for the preparatory camp ahead of its AFC Asian Cup Final round qualifiers.

Blasters have already extended centre-back Bijoy for a long-term joining the likes of Rahul and Sahal who extended long-term last year as well.

Commenting on his new extension, Jeakson said, “I am delighted to continue my association with this amazing club, which I consider very close to my heart. I thoroughly enjoyed myself playing for Kerala Blasters in the past three seasons and I am very grateful that I will be able to continue donning the yellow shirt.”

“Last year we came very close to create history but missed it in the end. I hope to achieve success with the club in the coming seasons,” said an ecstatic Jeakson Singh.

“I’m very happy about deal with Jeakson. He has the potential to be one of the best players in India and is still far from his potential. I don’t have any doubt on his work ethic and professionalism. I look forward to working with him and to chasing our targets together,” said Karolis Skinkys, Sporting Director of KBFC.

Coming from Manipur, Jeakson was introduced to football by his father. His career began at the age of 11 when he joined the Chandigarh Football Academy, where he spent five years learning and developing his skills.

In 2016, he joined the youth team of Minerva Punjab and was a crucial player in the academy team which won the AIFF U-15 & U-16 Youth League titles for two years consecutively.

In 2017, Jeakson Singh represented the Indian team in the FIFA U-17 World Cup and created history by scoring India’s only goal in the tournament. He was then loaned to Indian Arrows during the I-League 2017-18.

The 20-year-old’s outstanding performance earned him a place with Kerala Blasters. Initially, in the reserve team, he was promoted to the senior team of Blasters in 2019. Since, Jeakson has made 48 appearances, 2 goals, 187 tackles and 35 interceptions till date for Kerala Blasters in the Indian Super League.