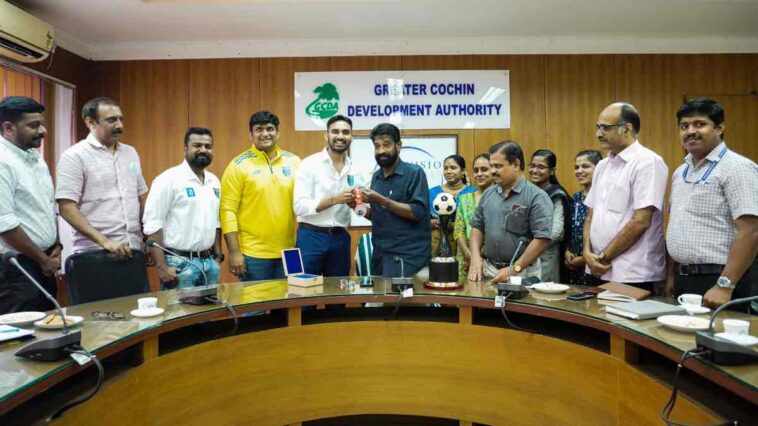 ISL 2022-23: Kochi will be the venue for the upcoming 9th season of the Indian Super League

Kochi Jawaharlal Nehru International Stadium will be the venue for the upcoming season of the Indian Super League (ISL 2022-23).

Kochi, the home ground of the Kerala Blasters, will host 10 matches during the ISL season, which runs from October 2022 to March 2023. Also, the inaugural match is likely to be played in Kochi itself. The Kerala Blasters team will start training in Kochi in August.

GCDA will continue to assist and co-operate with all operations of Kerala Blasters in Kochi. GCDA and Blasters will work together to develop football in Kerala and bring more matches to Kochi.

The GCDA will take immediate action to make the stadium environment more attractive and introduce a multi-level parking system to control unsanitary parking.

The GCDA will provide space and support for the first football museum in Kerala to be set up under the leadership of the Kerala Blasters.

The GCDA and the Kerala Blasters are jointly preparing to receive more fans for the upcoming season, taking into account the fan support for the Kerala Blasters’ matches and the popular participation in the live streaming of last season’s matches.

“GCDA is keen to fully prepare the Kochi International Stadium for the next ISL matches, fully embracing the football excitement of sports fans in Kerala. GCDA still wants to strengthen its long-standing relationship with Kerala Blasters. All timely additions and development of stadium facilities will be undertaken by GCDA, which considers sports as an important area of ​​activity,” said GCDA Chairman K.S. Chandran Pillai said.

“The main objective of this association is to work for the long term relationship between GCDA and Kerala Blasters for the betterment of the football sector in Kochi. With the support of the esteemed GCDA Chairman, there is no doubt that the football world in Kochi can achieve great growth. We thank GCDA for their support and are looking forward to making all the Blasters fans back in Calcutta,” Kerala Blasters Director Nikhil Bhardwaj said.