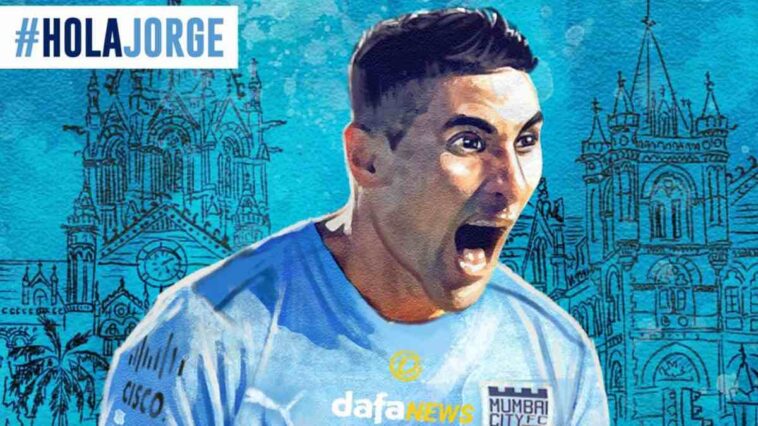 Ahead of the ninth season of the Indian Super League (ISL 2022-23), Mumbai City FC announced the signing of the Argentine centre-forward Jorge Pereyra Díaz on a one-year deal until May 2023.

Commenting on the signing Jorge Pereyra Díaz said, “To join Mumbai City, it is an honour for me. When I knew the club wanted me to join and shared their intentions with me, it was an easy decision to make and I am happy to be here. I’ve only spent one season in India but there are only a few clubs which have the ambitions that Mumbai City do and I think it was on full display in the club’s performances in Asia last season.”

“As a footballer, you always want to achieve success wherever you go. I enjoyed my time in the ISL last season but there’s a lot left for me to achieve. I’ve had conversations with the coach Des and his vision of what he wants to achieve with the club convinced me that this is the right step for me. I am optimistic about the new season and I hope I can offer my experience to make great memories with Mumbai City and its fans,” he added.

Des Buckingham, Head Coach, Mumbai City FC, said, “Jorge is a talented player that fits our game style very well. His quality on the ball was evident for all to see last season and his desire to work hard for his teammates will compliment the way we want to progress. His experience of already playing in the ISL will allow him to quickly settle with us and he is an exciting final signing for our foreign recruitment. I am delighted we have been able to secure a player of his quality and character to our family here at Mumbai City and look forward to seeing him continue on his excellent attacking play this coming season.”

Born in La Rioja, Argentina, the 31-year-old started his professional career at Argentine club Ferro Carril Oeste back in 2008 at the age of 18. He spent four years at Ferro, where he scored 15 goals in 86 appearances for the club. In 2012, Jorge Pereyra Díaz moved on to play for Club Atlético Lanus, where he helped his team win the 2013 Copa Sudamericana.

In 2014, the Argentine signed for Malaysian Super League outfit Johor Darul Ta’zim FC, where he scored 26 goals in 45 league matches for the club in three seasons. He was also featured in the AFC Champions League Qualifiers and the AFC Cup for the Malaysian club.

After loan stints at Atlético Independiente and León, Díaz returned to Atlético Lanus in 2018, before joining Club Bolívar. A move to Club Deportivo San Marcos followed before the forward returned to his home country to join Club Atlético Platense.

Ahead of the 2021/22 season, Díaz made his way to India when he signed for fellow ISL side Kerala Blasters and made his name with 8 goals and an assist en route to the ISL Final where he finished as a runner-up.