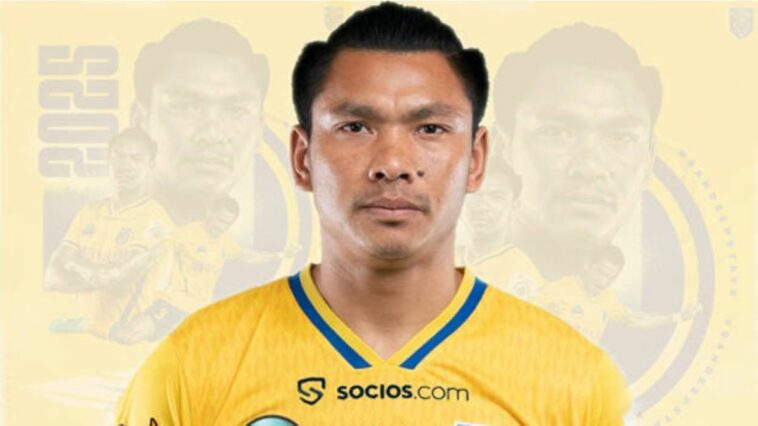 Ahead of the 9th edition of the Indian Super League (ISL 2022-23), Kerala Blasters FC announced the three-year contract extension of their defender, Sandeep Singh till 2025.

The 27-year-old had joined Kerala Blasters FC in December 2020 and was part of the Season 7 and Season 8 squad of the Indian Super League (ISL).

The KBFC recruitment department has been busy this off-season with numerous extensions already announced. Along with Sandeep, the blasters have secured the services of Bijoy Varghese, Jeakson Singh, Marko Lešković, Prabhsukhan Gill and Karanjit Singh on long-term deals.

“I am incredibly excited and honoured to have renewed my contract further with KBFC. Making my debut for the club in 2020-21 season was an incredible moment for me, and I want to continue improving my performances in each game. I am eager to play in front of the massive fan base we have and can already feel their shower of love which helps to keep me driven,” says Sandeep Singh.

“With his attitude and physicality, Sandeep Singh’s limits are high. He has all the potential needed to be a top player. Looking forward to working together for the upcoming seasons,” said Karolis Skinkys, Sporting Director, Kerala Blasters FC.

Hailing from Manipur, Sandeep started his football journey with Shillong Lajong Academy after which he got promoted into their senior team in 2014 and made his debut against Pune FC in the following year. In 2017, he joined Langsning FC and later went on to sign up with ATK FC for the 2018-19 ISL Season. The right-foot defender became part of Kerala Blasters FC after his short stint in TRAU FC for the 2019-20 I-League season.

Sandeep made his debut for Blasters against Bengaluru FC in 2020 and also won the Hero of the Match Award for the game against Goa FC in the same season. He has proved his versatility by playing in both wing-back positions and Centre back positions comfortably.

He has had an impressive stint with the club so far with a total of 28 appearances, making a staggering 89 tackles and 16 interceptions during this time.