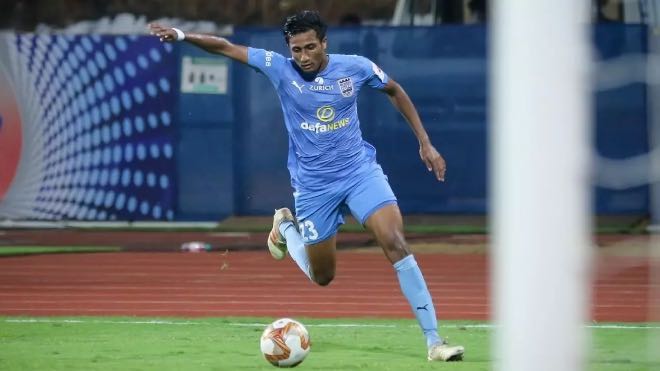 Mumbai City FC announced that Vignesh Dakshinamurthy has signed a fresh four-year contract extension that will keep him at the club until May 2025.

Having featured at the u-23 level for India as an Islander, Vignesh turned out for the reigning ISL champions on 22 occasions in the 2020-21 campaign and scored an outstanding goal against Hyderabad FC, his first for the club. Having committed his future to Mumbai City FC, Vignesh is expected to be a key part of the Islanders’ ISL title defence as well as the club’s maiden AFC Champions League campaign in 2021-22.

After signing Vignesh Dakshinamurthy said, “It’s a great moment for me and my family. I’ve been at Mumbai City FC for three years now and it’s a special feeling committing my next few years to a club that has shown faith and supported me throughout. I take a lot of pride in the fact that I could be a part of a historic season, winning our first trophies for Mumbai City. The vision of the club, the head coach Sergio Lobera and the determination of our group, despite the tough circumstances we’re currently living in, is the reason why we won and why we are a big family.”

“Like I said before, working with a guiding force like Sergio Lobera has been a gift for me. The coach trusted me and my abilities, sometimes more than I did myself, and that’s why I could give my best. I want to continue to give my best to this club and it’s fans and I look forward to sharing more incredible success with the Islanders’ family for a long time to come,” he added.

Head Coach, Sergio Lobera said, “Vignesh is a young, hardworking boy, and an excellent professional who is eager to improve each and every day. He showed tremendous character throughout the season and he was ready to step in whenever the team needed him. I strongly believe that Vignesh has a bright future ahead of him and I am happy that he will be with us at Mumbai City for the foreseeable future.”