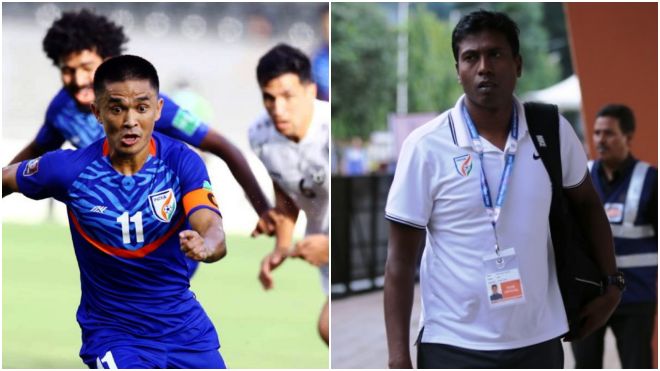 It was Stimac's decision to take him off!: Venkatesh Shanmugham on Sunil Chhetri substitution

India were held to a 1-1 draw in their last group stage match against Afghanistan. Courtesy of finishing third in the group behind leaders Qatar and Oman, they have qualified for the third round of the AFC Asian Qualifiers.

India had the lead in the match against the Afghans but conceded late and had to settle for a point. Goalkeeper Ovays Azizi accidentally sent the ball off Ashique Kuruniyan’s cross into his own net before substitute Hossein Zamani (82′) denied India a win.

However, there was one topic of controversy surrounding the match. And this is the early substitution of Indian captain Sunil Chhetri. He was taken off at the 69th-minute mark by coach Igor Stimac.

India’s assistant coach Venkatesh Shanmugam has now come out and said the reason for taking off Sunil Chhetri when the game was goalless. He says the coach wanted to rotate the positions and hence took him off.

“It’s the [head] coach’s (Igor Stimac) decision. According to the game, requirement of positions change. That’s all. We were trying to score till the 90th minute, and some players were tired. It happens,” he said.

“Now there are a lot of new players and we have to concentrate to increase our level. We are in a process and the players are responding well as compared to the first game till now. We are confident as coaches,” he said.