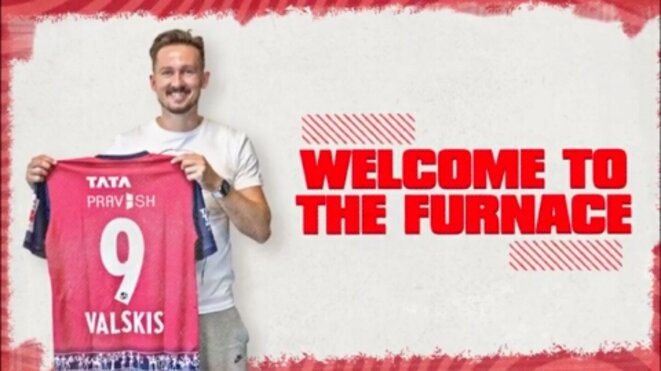 Jamshedpur FC have acquired the services of former Chennaiyin FC player and 2019-20 Hero ISL Golden Boot winner Nerijus Valskis on a 2 year long deal which will see him stay with the club till 2022.

The Lithuanian striker had a wonderful season with Chennaiyin FC, helping to reach the ISL final after a disastrous start of the season. Valskis ended the season with 15 goals and six assists, total 21 goal contribution.

Rumours were circulating around the web for some months now that Jamshedpur FC interested to sign Valskis. It further picked up the pace after his former boss at Chennaiyin FC, Owen Coyle signed for Jamshedpur FC.

Finally the rumours have come true as the club announced the signing through a official press release today.

We are proud to welcome this Lithuanian star and champion forward, @NValskis to our @IndSuperLeague Season 2020-21 squad today. Johar, Nerka!

Delighted Valskis told in the press release, “I am thrilled to be playing for a football-crazy city like Jamshedpur. The city has a huge legacy in football, and I want to help add silverware by winning the coveted ISL trophy for the fans. It is unfinished business for me, and I hope to work hard towards contributing and making Jamshedpur FC Champion of India! This club has huge ambition, and I can’t wait to kick-start an exciting future.”

Owen Coyle expressed his happiness too after completing the deal, “Nerka is a seasoned striker with goalscoring prowess and hunger to attack the opposition at all times. His link-up play, agility, and finishing is of the highest order, probably the best in the league, and he was the Golden Boot winner for a reason. His performances last season were so powerful and lethal, that his mere presence in the dressing room and the pitch automatically lifted everyone around him. I look forward to working with him and have another successful season.”

The club CEO, Mukul Choudhari stated, “We are incredibly pleased to have signed Nerijus Valskis. He is a player with proven quality. We have watched and admired him for some time as he had all the attributes we are looking for to fulfill our requirements. He is a great team player behind the scenes resulting in a healthy camaraderie within the squad. It’s an exciting day for all of us at Jamshedpur as I believe he is one of the league’s top players.”

Nerijus Valskis is a experienced player, he has played in countries like Lithuania, Belarus, Latvia, Israel, Poland and Romania. He then came to India when he signed for Chennaiyin FC. Now the forward is all set to stay in India for another 2 years with Jamshedpur FC.