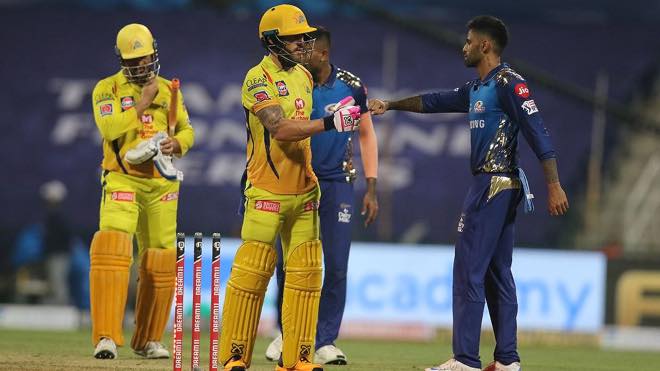 While it was a behind-the-closed-doors event, there was not any shortage of entertainment as the blockbuster Mumbai Indians (MI) and Chennai Super Kings (CSK) met in the opening game of the Indian Premier League (IPL 2020) at the Sheikh Zayed Stadium in Abu Dhabi on Saturday.

It was Chennai Super Kings’ captain MS Dhoni who won the toss and asked Mumbai Indians to bat first on the surface which was likely to help batting in the 2nd inning. It was a firing start from Mumbai Indians as captain Rohit Sharma and Quinton de Kock started off with some cracking boundaries. Rohit Sharma scored the first boundary of the tournament in the very first ball of the first over.

When it was all looking well for Mumbai Indians, CSK’s mastermind MS Dhoni brought in new Chennai Super Kings player Piyush Chawla to bowl. He dismissed Rohit Sharma in the very first over of his for 12 runs. And in the very next over, Sam Curran sent De Kock back to pavilion when he was looking dangerous for 33 runs.

The middle order which includes players like Hardik Pandya, Krunal Pandya and Pollard didn’t work for Mumbai Indians except for Saurabh Tiwary who scored the most 42 runs in 31 deliveries with 3 boundaries in 1 six, but was dismissed by Ravindra Jadeja after a brilliant catch from Faf Du Plessis.

For CSK, Lungi Ngidi was the pick of the bowler, he picked 3 wickets and gave away 38 runs in his 4 overs. 2 wickets each for Jadeja and Deepak Chahar. Sam Curran and Piyush Chawla managed to pick up 1 wickets each.

In response to MI’s 163 runs target, Chennai Super Kings started off miserably as they lost 2 early wickets in Shane Watson and Murali Vijay, inside 2 overs. Then, Ambati Rayudu and Faf Du Plessis took control of the inning.

Both players combined scored 115 runs, and overturned their bad start into something good. But Ambati Rayudu departed in the 15.6 over after scoring 71 runs. While Faf Du Plessis remained unbeaten after scoring 58 runs.

Sam Curran played a quickfire inning towards the end, he scored 18 runs in 6 balls which includes 2 sixes and a boundary. Ravindra Jadeja also contributed in this chase as he scored 10 runs in 5 balls. Nothing special was there to note for any of the Mumbai Indians bowler. Rohit Sharma used 5 bowlers in this match, all picked up 1 wicket each.

Sam Curran named Player of the Match after scoring a quick 18 runs and also managed to pick up 1 wicket.