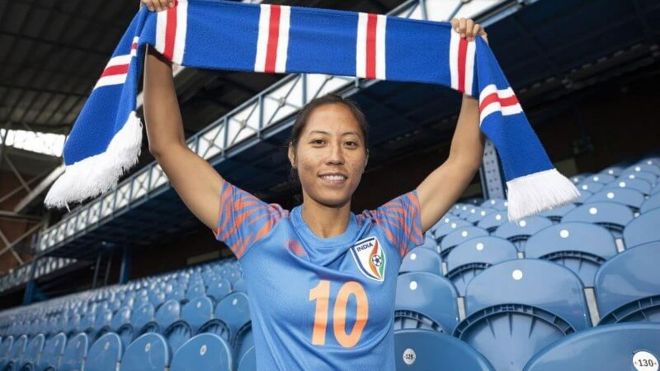 India team forward Ngangom Bala Devi has won the AIFF women’s footballer of the year award for the third time in her career. The prolific striker has previously bagged the award in 2014 and 2015.

Currently, Bala Devi plays for Scottish club Rangers. She remains the only Indian women footballer to have signed a professional contract with a European football club.

Bala Devi signed got Rangers last summer. She scored the first goal for the first team last December and created history. Younger Manisha has won the ‘Emerging Player of the Year’ award.

“I’d also like to thank my coaches — both at my club in Rangers, and in the national team, and also and all the coaches that I’ve played under in the past. A big thank you also to my family and all my teammates for all the support,” Bala Devi said.

“I arrived in Scotland last year, just before the global lockdown had started, and acclimatising to any new place in such conditions has been extremely difficult,” she added.

“But with their help, I have been able to focus on the things that are most important, and keep myself in top shape, both mentally and physically,” she said.