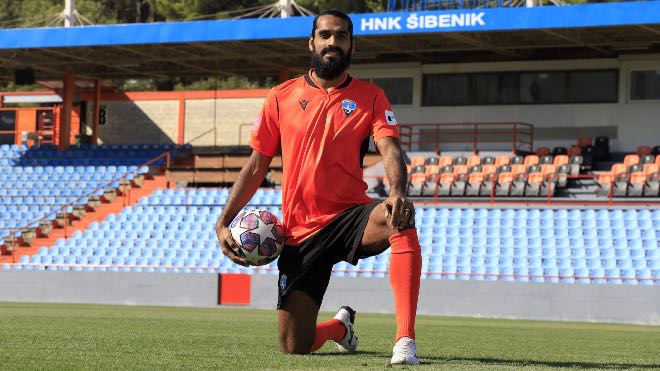 Sandesh Jhingan will become the first India international footballer to play in the Croatian top-tier league Prva HNL after completing a move from ATK Mohun Bagan to HNK Sibenik.

“We are very happy to have Sandesh with us. We expect good things from him as we have followed him on different platforms where we were able to see his past performances. Although we know the adaptation process might take him a few weeks, we are confident that with his quality and leadership, he will become an important member of the team,” said Francisco Cardona, CEO of HNK Sibenik.

Named India’s footballer of the year last month, the Indian defender is already in Croatia and watched Sunday’s home win against Hrvatski Dragovoljac.

“He made a very good impression on the staff and fans of the club when he was watching the last home game from the stands. He showed passion and energy for the team,” said Cardona.

Jhingan was excited to have the opportunity to move to HNK Sibenik in the Prva HNL in Croatia.

“I think I am at a stage of my career where I really want to test myself in the highest-level possible and I think this is the perfect platform for me. As I have said, it has been my desire to play in Europe and I have taken up this challenge upon myself,” Jhingan said.

“A big thank you to the Head Coach Mario Rosas and the owners and management for giving me the opportunity to come here. I cannot wait to get going and look forward to giving 100 percent at every given opportunity,” he added.

On leaving ATK Mohun Bagan, Jhingan said, “I have nothing but a big thank you to say to everyone involved at ATK Mohun Bagan. The last year was my comeback from injury and it turned out to be one of my best years. Coach Habas has motivated me and pushed me to improve every day and I will be thankful for what he has done for me in this past year.”

“Mr. Goenka and other Management Members have been very supportive and they know although this decision means one player less for them it means one fan more for them as I will always be a fan of the way the club is run,” he added.

“A big thank you to the fans who supported me who make this beautiful club what it is and all the best to the team for the coming AFC Cup and Indian Super League. ATK Mohun Bagan has a strong team and I know they will always be pushing for trophies whenever they play,” he concluded.

“We are very happy that Sandesh is with us. We know he will help us achieve the goals that we have set for ourselves during the season. His stint here will help him grow as a player and person,” said HNK Sibenik coach Mario Rosas.

The Spanish coach was all praise for Jhingan’s decision to move out of his comfort zone.

“We hope that he will continue to be an example for Indian footballers. He has demonstrated his ambition and competitiveness by wanting to get out of his comfort zone and show what Indian footballers are capable of,” said Rosas.

Jhingan started his youth career at St. Stephen’s Football Academy in Chandigarh and got a break in the top division with United Sikkim in 2011. Sandesh, as a young 21-year-old footballer first broke into prominence during the inaugural edition of the Indian Super League (ISL) when he was adjudged the Emerging Player of the League in 2014. A feat that helped him earn a place in the senior India national team making his debut in 2015 against Nepal at the FIFA World Cup 2018 qualifiers.

The defender has two ISL runners-up medals with Kerala Blasters FC where he spent six years and moved to ATK Mohun Bagan in 2020 after missing the previous season due to injury.

Founded on December 1, 1932, HNK Sibenik returned to the premier division last season under new management. The club finished sixth in the league, just two positions below qualification to European competitions. The club is located in Sibenik, the Dalmatian region of Croatia, a beautiful touristic city with breath-taking fortresses protecting the city for centuries and a beautiful Cathedral of St. James, included on the UNESCO World Heritage List.