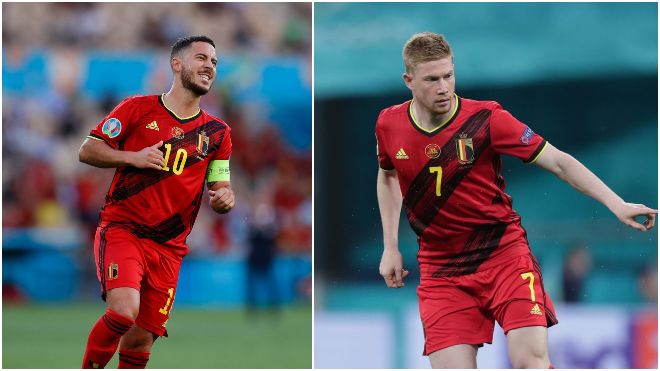 Belgium defeated Cristiano Ronaldo’s Portugal in the round of sixteen match at the Euros 2020. Thorgan Hazard scored a spectacular long-range goal to score the solitary one of the match. They will be facing Italy in the quarterfinals.

However, Belgium will go into the game missing two of their major players- Eden Hazard and Kevin De Bruyne. Hazard suffered yet another injury after pulling up his hamstring in the game against Portugal.

On the other hand, Kevin De Bruyne too felt the heat of the tackle from Palhinha. He had to be substituted shortly after the halftime break. Coach Roberto Martinez says although the injuries are not serious, either of them can’t play against Italy.

“The initial information that we have from medical staff is positive for both, they will remain with the squad and they have no structural damage,” Martinez said in his latest press conference.

“But we are running up against time and it is very difficult to see them fully fit. So, we have to take it day by day to try and get them fit,” he said.

“We were all a bit concerned before we got the news from the scans and it was a relief to all that we can now work on trying to get them fit again,” he added.

Italy will have the upper hand at this stage. In the absence of Eden Hazard and Kevin De Bruyne, Belgium’s attack will be lacklustre and fail to support Romelu Lukaku. Italy will be in pole position to extend their unbeaten run.